HeadWay - A New Window to the Skull Base

A New Window to the Skull Base 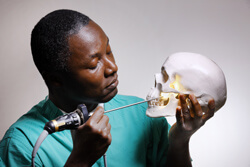 Kofi Boahene and his colleagues are now accessing the skull base through a new route.

When Jodi Elkin’s doctors discovered a new, large skull base tumor after a complicated surgery to remove another brain tumor, the 20-year-old and her family sought a consultation with Johns Hopkins head and neck surgeon Kofi Boahene. It was clear that her new tumor needed to be removed, but Boahene, who also specializes in facial plastic and reconstructive surgery, wanted to spare the college student another traumatic procedure.

Using traditional routes to access the skull base can be an ordeal for patients and doctors alike, Boahene explains. “You’re typically looking at a six-hour operation in which you have to cut bones, potentially causing disfiguring scars and putting facial nerves at risk,” he says. Moreover, the extensive procedure typically leads to long hospital stays and weeks of additional recovery time at home, a strain on both the patient and the health care system.

Contemplating the location of Elkin’s tumor while gazing at a skull model in his office, Boahene had a new idea. “I looked at the ‘window’ that already exists in the skull, behind the molars, above the jawbone and below the cheekbone,” Boahene says, “and realized this was an access route not previously recognized for this kind of surgery.”

Knowing there was always the option of switching to the traditional route while trying the new approach, Boahene and his colleagues performed the new procedure on Elkin last year. Instead of requiring the expected six hours, the operation was completed in two. Elkin was able to leave the hospital the next day and return to college, with no visible evidence that she had surgery performed. Because the surgical team made incisions on the inside of Elkin’s cheek, Boahene explains, the procedure left no external scars.

Since then, he and his colleagues have performed the same procedure for seven patients. A report in the October 2011 issue of The Laryngoscope describes details of three of these operations. In addition to the benefits for patients, Boahene and his colleagues say, the new procedure is significantly less complicated for surgeons to perform, provides excellent visualization of the skull base area, and could potentially save health care dollars due to patients’ shorter hospital stays.

The new procedure is also extraordinarily versatile, Boahene says. Besides providing better access for some tumor resections, the technique could be used for skull base biopsies or for injecting nerves in the skull base to treat intractable pain.

Not all patients are candidates for this procedure, Boahene cautions. It isn’t an option for those with very large skull base tumors or those with tumors that wrap around blood vessels. For these patients, traditional skull base surgery is still the best choice, he says.

In the future, he and his colleagues plan to try the new procedure using a surgical robot, a technique they’ve already perfected in the laboratory and which could provide even better visualization of the operative field, thereby further reducing chances of complications for patients.

“This approach,” Boahene says, “is a welcome addition to the number of unusual procedures we perform at Johns Hopkins.”

For more information, visit the Johns Hopkins Skull Base Tumors division in the Department of Otolaryngology-Head and Neck Surgery.