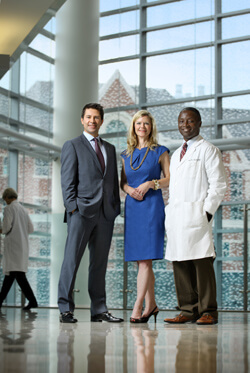 A cancer diagnosis is a devastating blow to any patient. But for those whose cancer treatment necessitates removal of broad swaths of the face and head, especially the nose, it’s “a double whammy,” says facial plastic surgeon Patrick Byrne.

“The dreaded word cancer itself is paralyzing,” he says, “but in this case, it’s compounded by orders of magnitude by the fact that not only can it kill you, but the treatment to cure the cancer requires the removal of your defining facial features. It is unbelievably stressful.”

Resection of the nose is particularly problematic, Byrne explains, because it can cause both functional problems and debilitating social effects. Taking away the nose can lead to breathing problems, especially those that can prevent a good night’s sleep. However, for most patients, the social effects are far more serious. Research led by Johns Hopkins facial plastic surgeon Lisa Ishii suggests that observers can detect much smaller abnormalities in the center of the face than on any other part.

Although losing an ear doesn’t have the same dramatic social effects, Byrne says, patients do have to work hard to cover the defect, and a missing ear can affect hearing and have other functional effects, such as difficulty wearing glasses.

For patients with these defects, the first treatment decision once their cancer is resolved is whether to replace the nose or ear with a prosthetic or reconstructive surgery. Both have their benefits and drawbacks, Byrne explains. Well-done prosthetics can look very natural, seamlessly replicating the original structure. However, they require maintenance and care, as well as daily application, factors that lead most patients to decide against prosthetics.

Reconstructions can be very involved operations, Byrne adds, requiring hours in the operating room and often several follow-up procedures. However, in the hands of a skilled facial plastic surgeon, results can bring patients close to their presurgical appearance.

Byrne and his colleagues at the Center for Facial Plastic and Reconstructive Surgery, including Ishii and Kofi Boahene, perform hundreds of nose and ear reconstructions each year. To replace entire noses or ears, procedures often start with placing vascularized tissue taken from elsewhere in the body to cover the gap in the skull and create a foundation for other replacement tissues. Cartilage, also taken from elsewhere in the body—frequently from the ribs—is typically used as the sculpting material to replicate the form of the original structure. For the nose, additional vascularized thin tissue is needed to line the lumen and nourish the cartilage from beneath, helping to keep the graft open.

Recreating a patient’s original appearance and function requires a team approach, using not only the skills of the facial plastic surgeon, but the artistry of an anaplastologist. At Johns Hopkins, anaplastologist Juan Garcia makes a mold of the patient’s nose or ear before it’s removed, then uses reverse engineering to create a surgical guide that assists the three plastic surgeons in forming features with the right shape and proportions in the operating room.

Though many patients require follow-up procedures to correct for changes during healing, especially if radiation was necessary, Byrne says that in the end, regaining that critical missing feature helps patients move on from their devastating experience.

“I love the challenge of getting people through to the other end,” he says, “out of the tunnel and living life again.”