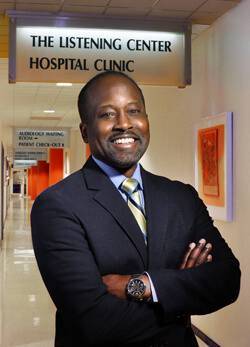 When Johns Hopkins started its cochlear implant (CI) program in 1991, its patients were mostly profoundly deaf young adults and children of families who went out of their way to access this new and obscure technology. The overall risk of infection was unknown, so doctors were hesitant to provide implants to any but the most severe cases. The external part of the device, the voice processor, was a palm-size box—much smaller than previous shopping-cart-size models, but still cumbersome.

Over the past two decades, says new Listening Center Director Howard Francis, CIs and their indications have changed quite a bit. For starters, he explains, the discrimination thresholds necessary to receive this device have steadily increased. Though CIs were originally indicated only for patients with effectively no speech discrimination, within a decade, the indication had risen to a 40 percent discrimination threshold. Today, that number is at 60 percent.

“We’re talking from zero to 60 in the past couple of decades,” Francis says.

With this change, many more patients became eligible for the technology. Also, as more patients received CIs without infections or other adverse events, audiologists and otologists were more likely to suggest them.

A larger age range of patients now receive CIs as well, Francis says. With research showing that earlier implantation provides tremendous benefits in language acquisition, the recommended earliest age for CIs has decreased from age 2 to age 1 for children with congenital hearing defects.

On the other end of the spectrum, increasing numbers of older adults are getting them, too. “It’s one of our fastest growing demographics,” he says. With older adults healthier than ever, more want to live life to the fullest, and they are increasingly comfortable turning to technology to do so, Francis explains.

The device itself has also undergone changes, he adds. The external equipment has shrunk from a box worn on the belt to a hearing aid-size device worn on the ear. More importantly, the computer programming that translates sound has undergone dramatic improvements over the years.

Francis notes that further change may be coming soon. Doctors and patients are exploring whether CIs might treat unilateral hearing loss, rather than the bilateral loss for which it’s currently indicated. Patients who have good low-frequency but poor high-frequency hearing are already benefiting from hybrid devices that work as a combined CI and hearing aid, a strategy that Francis predicts will grow more popular. Eventually, he believes, CIs will be completely internal, with no externally evident parts.

For now, Francis says, the technology is helping children to achieve academic success, working adults to advance professionally and older adults to remain socially engaged. “Our mission,” he says, “is to use this device to help make people’s lives fulfilled in whatever way is meaningful to them.”