HeadWay - A Rising Star at NASA

A Rising Star at NASA 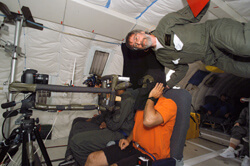 Space has always been both an avocation and a vocation for Mark Shelhamer. Born in 1959, he was 10 years old when the Apollo 11 astronauts first walked on the moon. Shelhamer eagerly followed the news of future Apollo missions and eventually chose electrical engineering as a college major. His interest in signals and systems took him to graduate school for biomedical engineering at the Massachusetts Institute of Technology’s Man-Vehicle Lab, which studies how the processing of sensorimotor signals changes in the extraterrestrial environment.

As Shelhamer proceeded to a postdoctoral fellowship and then a full-time faculty position at Johns Hopkins’ Department of Otolaryngology–Head and Neck Surgery, his focus on space took a more tangential role to other work on the vestibular system and sensorimotor adaptation. But in a twist of fate, that research will now take a back seat to space as he begins in a new position as the chief scientist of NASA’s Human Research Program at Johnson Space Center in Houston.

Though Shelhamer’s more recent work has received NASA funding, he wasn’t sure he was the best fit for the job when he applied.

The position called for extensive experience managing a large, diverse research portfolio. And, although Shelhamer manages several different National Institutes of Health and National Science Foundation grants, as well as a busy, productive research lab, he wondered whether that might be enough.

“I worried about embarrassing myself,” he says. “But I thought, I’ll just apply and see how far this goes.”

Soon afterwards, he was invited to Houston for an interview—and then received a call telling him the two-year position was his.

Shelhamer notes that hiring a working scientist for this role is an unusual choice, and he admits he’ll have a lot of catching up to do on the ins and outs of the space program when he starts the position in June. But, by putting him directly into this job from the lab, he says, NASA is sending a message to outside scientists that their voices are heard.

A large part of Shelhamer’s new post will be liaising with outside scientists, making sure they have the resources to make the best discoveries and communicating the most relevant results within NASA. He will also act as the public face of the Human Research Program, regularly explaining how NASA’s limited resources are used for specific research projects.

Over the course of the temporary position, Shelhamer will have to shelve his own research projects at Hopkins. In addition to his wife and his cats, whom he’ll be visiting on a regular basis, he says he’ll really miss solving scientific problems at the ground level. “I’ll be seeing things from a much higher altitude at this position,” he says.

But in the end, Shelhamer says that when he returns, he’s hoping to bring a piece of NASA back to Hopkins. “My long-range goal is to expand the human space science program here,” he says. “The talent pool available here is incredible. We could do amazing things.”