A New Therapeutic Vaccine for RRP 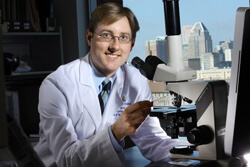 Simon Best is leading the development of a novel therapeutic vaccine that will help patients’ immune systems fight against HPV strains 6 and 11.

Doctors first began documenting recurrent respiratory papillomatosis (RRP) in the late 1800s, when technology became available to view the larynx in living patients. Then, as now, they diagnosed this disease by the characteristic wart-like tumors that lined patients’ airways, caused by the “low risk” 6 and 11 strains of human papilloma virus (different from strains 16 and 18, which are known to cause cancer). Surgery to remove the tumors temporarily fixed patients’ speaking and breathing problems—but doctors noticed early on that the tumors reliably returned, necessitating multiple follow-up surgeries that plagued patients for the rest of their lives.

According to laryngologist Simon Best, who treats patients with this condition at Johns Hopkins, not much has changed with RRP treatment for more than a century. True, patients now have anesthesia for surgery, and modern surgical techniques include high-tech tools such as potassium titanyl phosphate (KTP) lasers—angiolytic lasers that target the tumors’ high concentration of blood vessels. Best also uses the KTP laser to perform removal of papillomas in the office to avoid general anesthesia, but many patients still need operations over and over as tumors recur. Because some patients are born with this condition—thought to be transferred to infants through the placenta or in the birth canal—multiple surgeries over a lifetime can take a heavy toll.

“Patients who have had this disease since they were children have often had 150 to 200 surgeries by the time they’re in their 40s,” Best says. “That’s more than 100 instances of general anesthesia to debulk these tumors.” Additionally, he says, normal tissue is also harmed with each operation, raising the risk of scarring the vocal cords and causing permanent hoarseness and communication problems.

Convinced that there must be a better way, Best is leading efforts to develop a therapeutic vaccine that will help patients’ immune systems launch a fight against only human papilloma virus (HPV) strains 6 and 11. Unlike Gardisil or Cervarix, which can reliably prevent infection but cannot treat it, this novel therapeutic vaccine provides treatment to patients already infected with the virus.

The immune systems of most people launch a vigorous response against HPV strains 6 and 11, he explains, one reason why RRP incidence is relatively rare (only about 20,000 people in the United States have the condition, according to the National Institute on Deafness and Other Communication Disorders). For unknown reasons, those who develop RRP have immune systems that don’t recognize the virus, allowing it to infect cells.

Best’s vaccine incorporates DNA from two HPV viral proteins into a plasmid. When vaccinated cells take up this plasmid, they express the foreign proteins, signaling the immune system to take notice. With the immune system now primed against the HPV virus, when it sees the real viral invader, it’s more likely to launch an effective attack.

Best and his colleague are now testing the plasmids in mouse models to determine whether they generate the specific immune response they’re hoping for, which could eventually eliminate or reduce repeat surgeries for RRP patients.

“RRP is an orphan disease—there hasn’t been a lot of scientific attention paid to people who have this extremely debilitating and lifelong problem,” Best says. “My hope is that through this vaccine, or future iterations, we’ll have a therapy that can finally be a cure.”