Preventing HPV-Linked Cancers and Their Recurrence 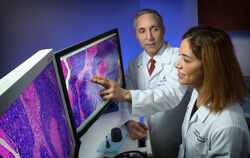 1 2
Carole Fakhry and Joseph Califano are studying the connection between tobacco use and HPV16-related oropharyngeal cancers.

The rate of oropharyngeal cancers has dramatically increased, with cases more than doubling in the past two decades. The main culprit behind this increase, say Johns Hopkins head and neck surgeons Carole Fakhry and Joseph Califano, is HPV, a sexually transmitted infection. This virus is now responsible for the majority of oropharyngeal cancers in the United States. This startling increase is spurring a bevy of research into ways not only to combat these cancers, but also to prevent them and decrease their recurrence—areas to which both Johns Hopkins physicians are contributing.

Why Do Only Some People Get HPV16-Related Cancers?

In a recent study, Fakhry, along with Johns Hopkins epidemiologist Gypsyamber D’Souza, delved into why some people seem susceptible to HPV16-related cancers and others don’t.

“Sex is common, but this infection and cancer are rare,” Fakhry says. “So, there must be cofactors in the process that explain why some people become infected or develop HPV-positive oropharyngeal cancers, when most others don’t.”

Study Shows Relationship Between Tobacco Use and HPV16 Infection

Fakhry and D'Souza looked into the relationship of cigarette use and oral HPV16 infection. They used sensitive markers of tobacco present in the blood or urine of a large group representative of the U.S. population to see the effect of tobacco on infection.

Results showed that people with higher levels of the tobacco-related biomarkers were more likely to have oral HPV16 DNA compared with those who had no detectable levels of the compounds, with a robust dose-response curve—strong evidence that tobacco use and HPV16 infection are linked.

“These results may provide an additional reason for smoking cessation and suggest that even modest amounts of tobacco use are associated with higher oral HPV prevalence,” Fakhry says.

Though HPV-related oropharyngeal cancers are highly survivable—as high as 90 percent in the first two years—only about one-half of patients survive two years after recurrence. But early treatment at recurrence gives the best survival odds, a strong incentive to find ways to detect recurrence as soon as possible, Califano says.

Recently, Califano and his colleagues published research that showcased a powerful and accurate way to screen HPV-linked oral cancer patients for recurrence. Using blood and saliva samples taken before and after the patients’ treatment for their initial cancers, the researchers found that they could accurately predict recurrence up to 70 percent of the time by detecting lingering HPV viral particles. Califano’s team is currently looking for other genomic biomarkers that would increase the specificity of HPV DNA testing in blood and saliva.

“There is a window of opportunity in the year after initial therapy to take an aggressive approach to spotting recurrences and intensively addressing them while they are still highly treatable,” Califano says. “Until now, there has been no reliable biological way to identify which patients are at higher risk for recurrence, so these tests should greatly help do so.”