A Revealing Biopsy for Sjogren’s Syndrome 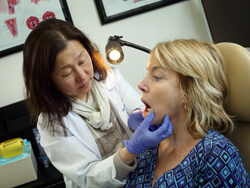 Jean Kim has developed a biopsy technique that offers the most definitive diagnosis of the enigmatic Sjogren’s syndrome.

Sjogren’s syndrome is one of medicine’s most puzzling enigmas. Recognized as an autoimmune disorder, its constellation of symptoms can seem bafflingly unrelated, causing problems as diverse as multiple dental carries, chronic dry eye, painful intercourse and digestive problems. Though researchers have tied many of these issues to an attack on the body’s exocrine glands, including salivary and lacrimal, its cause and exactly how it exerts its effects remain a mystery.

“What we don’t understand is the root cause of the process,” says Johns Hopkins otolaryngologist–head and neck surgeon Jean Kim. “But what we do know is that this syndrome is excruciatingly debilitating for patients.”

So much about Sjogren’s still remains unknown that even diagnosing the disease can be a challenge. That’s where Kim’s expertise comes in. Through working with numerous patients in Johns Hopkins’ Jerome L. Greene Sjogren’s Syndrome Center, the only clinic in the world dedicated to patients with this condition, she’s perfected a technique for biopsy of the minor salivary glands in the lower lip. The results from this biopsy provide the largest and most definitive clue available for separating Sjogren’s from other conditions with related symptoms.

What Differentiate's this Biopsy for Sjogren's from Others?

Thousands of minor salivary glands line the mouth and upper airways, providing the mucus necessary for proper aerodigestive function. However, explains Kim, few physicians are trained or experienced in effectively and safely dissecting minor salivary glands from surrounding tissue. These glands are superficial and surrounded by a delicate lacework of nerves, she says, necessitating an approach as noninvasive as possible into the right layer of tissue, rather than a simple wedge resection that often doesn’t produce any of the desired glands and can result in numbness of the lower lip.

Having standardized this approach at the Sjogren’s Syndrome Center, Kim and her colleagues are able to move patients efficiently from diagnosis to therapy. She sees patients on Wednesdays in the clinic, working with other specialists to provide supportive therapy for the individual facets of this condition. Treating patients effectively often involves experts in rheumatology, neurology, ophthalmology, gynecology and numerous other areas.

Researching the Cause of Sjogren's Syndrome

In addition to treating patients, Kim also performs basic research on this condition, searching for the Sjogren’s root cause and clues that could provide better treatments. Some of the minor salivary glands from patients’ biopsies also go toward this cause. Kim and her colleagues are currently studying the genetic makeup of patients’ glands and performing experiments to identify the functional differences between these and glands from healthy patients. Eventually, she says, their findings could provide new hope for patients plagued by this mysterious condition.

“It’s not enough to say that we don’t understand Sjogren’s and that it’s just going to be an enigma,” Kim says. “The patients we see fuel the fire that keeps us moving toward better treatments and, eventually, a cure.”