HeadWay - When Reflux Is More Than Reflux

When Reflux Is More Than Reflux 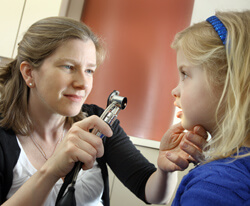 Soon after Sarah Kilareski was born in October 2006, she began to gag and spit up excessively. Her pediatrician wasn’t too concerned, says her mother, Carrie Kilareski, because Sarah was gaining weight. But at her 12-month well-baby check, she’d dropped from the 60th percentile on the weight growth chart at 6 months to zero percent.

Over the next three months, Sarah underwent a series of tests and procedures, including endoscopy, at a gastroenterology clinic near her home. The results showed she had reflux. But Kilareski believed the problem was far more complicated.

“It was heartbreaking to watch your 1-year-old daughter become skin and bones,” she says, “when you knew you were doing everything you could to feed her. The doctors started using words like malnourished and failure to thrive.”

More answers came after a barium swallowing test revealed that Sarah was aspirating thin liquids. A brain MRI ruled out a neurological cause, and Sarah was referred to an ear, nose and throat specialist who concluded, without a bronchoscopy to evaluate her lungs and airways, that Sarah’s swallowing problem was related to a developmental delay.

“I knew in my heart something was not right,” says Kilareski. “It was frustrating. Sarah would often get sick with fevers and the doctors didn’t know how to incorporate her aspiration issues into a diagnosis and treatment.”

Seeking a second opinion, mother and daughter headed to a new clinic that Hopkins Children’s Center had recently opened to treat aerodigestive diseases, conditions involving the airways and upper digestive tract. There, Sarah would be evaluated and treated by a team of pediatric gastroenterologists, otolaryngologists, pulmonologists and speech-language pathologists who would bring collective insights to bear in the case.

“We’re all in the same clinic at the same time so we can see and talk about the patient together, and then send a full note to the pediatrician saying what we collectively think needs to happen,” says pediatric otolaryngologist Margaret Skinner.

To get to the bottom of Sarah’s aspiration reflux problem, pediatric gastroenterologist Karla Au Yeung used an endoscope to examine her esophagus, and Skinner used a bronchoscope to look at her airway around the larynx and voice box. They both saw a small laryngotracheoesophageal cleft (LTEC), a rare and often easy-to-miss midline opening between the larynx, the trachea and the esophagus.

Within two weeks of diagnosis, Skinner operated to repair the cleft, and last year Sarah, for the first time, passed a swallowing study. Skinner emphasizes that both the detection and optimal treatment of the complex disorder would likely not have happened without the team of specialists focusing on it together.

“I need the gastroenterologist’s guidance in finding the best strategy of fixing the cleft,” Skinner explains, “and the pulmonologist needs my help before he can improve airway problems. It really is a collaborative effort that can produce remarkable results.”