HeadWay - Toward an Artificial Trachea

Toward an Artificial Trachea 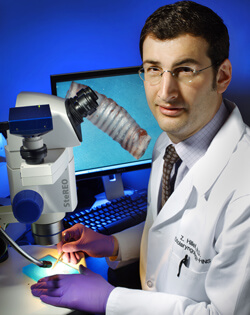 Alexander Hillel is combining what he’s learning from other tissue engineering work toward his ultimate goal of constructing an engineered trachea.
photo by Keith Weller

Tissue engineering is making great strides in many fields of medicine—and according to otolaryngology–head and neck surgery fellow Alexander Hillel, his is no exception.

“There are few specialties,” he says, “where tissue engineering could be so versatile and make such a difference for our patients.”

For example, Hillel and his colleagues recently published research on combining synthetic and biologic materials into a composite that could eventually act as a handy filler for soft tissue restoration. Current fillers include materials like combinations of collagen and hyaluronic acid. Though these work well for filling small defects, such as those in common cosmetic procedures, their lifetime in vivo before resorption is too short to use for more extensive facial plastic surgery, such as repairing the much larger defects introduced by tumor resections.

The new material is a mix of hyaluronic acid and polyethylene glycol (PEG), a synthetic material so biologically friendly that it’s already being used in other biomedical applications, such as drug delivery. The biosynthetic material cross-links following light exposure, Hillel explains, so that physicians who use this filler could have the chance to mold it before it polymerizes. He adds that altering the proportion of PEG changes the firmness of the material, giving it versatility for a variety of uses, from filling nasolabial folds to larger defects in the skull.

Hillel’s other recent successes have involved creating a variety of three-dimensional constructs combining cells and scaffolding materials. For example, he and his colleagues recently published work showing the potential of growing engineered adipose tissue using embryonic germ cells and a PEG-based scaffold. They have also created engineered musculoskeletal tissues from embryonic germ cells seeded onto similar synthetic scaffolds. These advances could eventually provide adipose or cartilage tissue to implant in patients.

Because his clinical interests focus more on the voice and airway, Hillel plans to combine what he’s learning through these experiments to construct a viable engineered trachea, work that could provide new options for patients with airway narrowing from frequent intubations, Wegener’s disease, or idiopathic causes. Starting with decellularized tracheas, he’s currently working on finding the right stem cell types to populate these natural scaffolds to create something long sought in medicine—a substitute for the damaged tracheal airway that enables full and effective breathing.

“We have some obstacles to overcome before we can translate this therapy,” Hillel says. However, he adds that he has no doubt it will eventually help a select group of patients with no alternative. “This field is progressing so quickly. For tissue engineering, the future is now.”