HeadWay - Sounding the Alarm on Hearing Loss in the Elderly

Sounding the Alarm on Hearing Loss in the Elderly 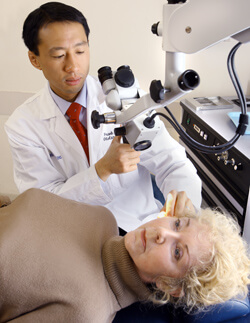 With new research suggesting that hearing loss can lead to dementia, Frank Lin has plans to overhaul care for elderly patients who are hard of hearing.
photo by Keith Weller

The elderly patients who make up about a third of Frank Lin’s hearing loss practice are aware of their hearing deficits, and they’re interested in doing something about it. However, says Lin, this group of patients is the heavy exception to the rule.

“I’m just seeing the tip of the iceberg,” the otologist explains. “The vast majority of older people ignore their own hearing loss, and geriatricians don’t push this issue with their patients. Why would they? It’s mainly been seen as a minor quality-of-life issue, just a nuisance of old age.”

But Lin and his colleagues are showing that hearing loss in the elderly could be far more than just an inconvenience. In a study published this February, they showed that seniors whose hearing had waned were significantly more likely to develop dementia over time than those who retained this sense.

The study, published in the Archives of Neurology, followed 639 people for up to 18 years, with all of them receiving periodic cognitive exams. Participants with hearing loss at the beginning of the study were significantly more likely to develop dementia by the end. Compared with volunteers with normal hearing, those with mild, moderate and severe hearing loss had twofold, threefold and fivefold, respectively, the risk of developing the memory-robbing disease over time.

Even after the researchers took into account other factors associated with risk of dementia, including diabetes, high blood pressure, age, sex and race, hearing loss and dementia were still strongly associated.

In a second study also published in February in the Journal of Gerontology: Medical Sciences, Lin and his colleagues showed that nearly two-thirds of American adults over age 70 have hearing loss—and might be susceptible to the cognitive effects shown in their first study. “It’s really a larger and more serious problem than we expected,” he says.

Now that an impressive collection of clinical results are in, Lin is developing a solution. Through his joint work with the Johns Hopkins Department of Otolaryngology–Head and Neck Surgery and the Johns Hopkins Center on Aging and Health, he’s come up with a multipronged plan of attack. First, he’s studying which molecular and genetic factors might cause hearing loss in aging and whether intervening with these factors might lessen the risk of hearing loss or even improve hearing. He’s also studying whether improving hearing now might lessen cognitive risk. Lin is launching a study this spring to follow patients who get hearing aids or cochlear implants to see if these devices improve their cognitive abilities.

Lin’s research plan has more immediate effects. In the next few years, he wants to overhaul the way hearing aids are delivered. He explains that audiologists are often able to spend time fitting a patient with the correct hearing aid, but sometimes don’t have the time or resources to provide patients with follow-up rehabilitative care.

For low vision, he explains, patients might meet with an optometrist, an occupational therapist and a counselor, who all work together to develop a comprehensive plan for how patients and their families can accommodate vision deficits and use new vision technology. Lin is hoping to adopt a similar, more comprehensive strategy with aural rehab.

“Now that we know what’s at stake for older patients with hearing loss,” Lin says, “we know we can’t ignore this problem any longer.”

For more information about hearing loss care at Johns Hopkins, visit the Division of Audiology/Hearing.