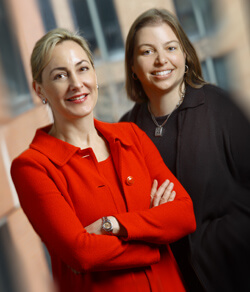 Seeing depressive symptoms in their obstructive sleep apnea patients comes as no surprise to head and neck surgeons Stacey Ishman and Christine Gourin. The poor nighttime sleep quality and daytime sleepiness that accompany obstructive sleep apnea (OSA) combined with spiraling neurocognitive deficits and a long-term increased risk of heart attack and stroke would be a depressing diagnosis for anyone. But Ishman and Gourin wondered whether there might be more to the story.

“Anecdotally, we’ve often noticed that if you’re tired, you’re more likely to feel depressed,” says Gourin. “But which comes first? We wanted to find out whether our patients’ OSA was causing their depression, or whether daytime sleepiness was the real culprit.”

To sort out the cause, the researchers conducted an initial study of 53 OSA patients. Scores on a depression inventory suggested that 35 percent of these patients were depressed. However, these scores didn’t correlate well with their sleep study results—the patients’ depression severity didn’t rise in step with their respiratory disturbance indices.

Instead, the researchers found that patients’ depression scores were more directly connected to their measurements on a scale that assesses sleepiness. “It’s not a function of how bad their apnea was,” says Gourin, “but a function of how sleepy they were.”

That led the researchers to another theory: Once OSA is treated surgically, does the depression also go away?

This time, Ishman, Gourin and their colleagues looked at a different cohort of 19 OSA patients. More than half of these patients reported excessive daytime sleepiness, and about a third were depressed. After surgery, the researchers found that daytime sleepiness resolved for most of the patients, and depression lifted for each of the depressed patients.

“We’ve seen that OSA patients are often much happier after surgery,” Ishman says. “Now we know that as they’re able to get more sleep, their depression wanes. The effect of the surgery was substantial—these patients weren’t treated directly for depression at all.”

“Although the typical first line of treatment for OSA—continuous positive airway pressure (CPAP)—is 95 percent effective in resolving OSA,” says Ishman, who is also board certified in sleep medicine, “it’s zero percent effective if patients don’t use it.” About half of OSA patients can’t tolerate wearing the CPAP mask, she explains, so she, Gourin and their colleagues turn to surgical treatments next.

Depending on the source of their obstructions, patients have a range of surgical options. Ishman says she’s had the most success with a combination of surgical techniques that suspend and lift the tissues of the throat and base of the tongue. The team also often works with colleagues who have expertise in opening up nasal valves or maxillomandibular advancement to pull the midface forward, opening up the airway.

The end result, says Gourin, is the potential for patients to wake up refreshed and depression-free.

“Our OSA success stories,” she says, “are some of our most grateful patients.”