HeadWay - The Beauty and Biology of the Inner Ear

The Beauty and Biology of the Inner Ear 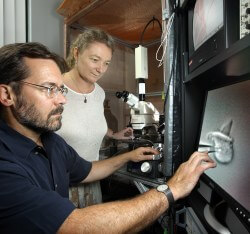 Paul Fuchs and Elisabeth Glowatzki have spent years mapping the pathways of bodily senses like sight and smell.

When researcher Paul Fuchs talks about the cochlea, you can almost hear him sigh. “Once I began working in the inner ear, and saw how extraordinarily beautiful it is, the detail, the anatomy, the differentiation on a functional level, the biophysics…it’s this amazingly sophisticated, elegant biological mechanism that I decided was where I was going to work.”

It’s this passion that’s helped Fuchs uncover the neurochemistry of hearing, the actual molecules that carry electrical signals from the cochlea’s hair cells to the brain for processing. While some deafness and hearing loss can be treated with mechanical aids such as cochlear implants, Fuchs’ work might someday yield drug or gene therapies that get at the root causes of hearing deficits.

Because the cochlear is so difficult to work with—its tissues and cells are encased in the body’s hardest bone, existing in separate compartments each with its own special fluid balance and gradients—it’s been harder to define the biochemical mechanisms of hearing versus other bodily senses such as sight or smell. Fuchs and fellow researcher Elisabeth Glowatzki have spent years mapping these pathways. Recently, they’ve both used mouse models to determine how the hair cell’s chemistry might be affected.

Glowatzki looks specifically at glutamate, the chemical released when a hair cell sends its electrical signal upstream. Her previous work found that the cells packaged glutamate in tiny vesicles: These cluster together at micron-sized ribbons similar to those used by photoreceptor cells in the eye. Like a raft full of passengers, the ribbons dock opposite the contact of a nearby auditory neuron that passes the glutamate signal along. Glowatzki proved that connection was vital in a recent paper in the journal Neuron, which showed that mice lacking the ability to release glutamate were profoundly deaf. She says proving that the deafness came from a deficiency in glutamate release and not the auditory nerve could have implications in humans. “If you can test for a gene that shows the absence of glutamate with a given deafness, we can say, Well, the nerve fibers are still intact, so a cochlear implant would help.”

Meanwhile, Fuchs is studying the brain’s feedback mechanism in the cochlea’s outer hair cells, which he says are designed to amplify the incoming sound waves. Thus, the brain operates like a soundman at a concert, modulating the volume and frequencies amplified by those outer hair cells at the source so that what we hear isn’t a cacophony, but a symphony. He and his colleagues recently created mice with a single mutation that altered the chemistry at a nicotinic receptor between the brain and the hair cells. By doing this, the brain exerted a stronger feedback effect that protected the mice against noise-induced hearing loss.

Fuchs says while nicotinic receptors are common throughout the body, “the one in the ear is genetically and pharmacologically distinct from others. So, it should be possible to find chemicals that act specifically in the ear and not in the brain or muscles that have other nicotinic receptors. That’s great because we could discover ear-specific drugs to take on noise-induced hearing loss.”