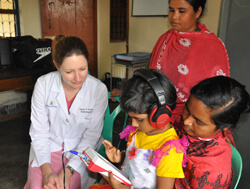 Susan Emmett has long known that she wanted a career in public policy. But, she says, to truly affect policy in the areas that interested her, she also needed to be a practicing doctor. So, after earning her undergraduate degree in molecular biology at the Woodrow Wilson School of Public and International Affairs at Princeton University and her medical degree from Duke University, she chose Johns Hopkins for her residency in otolaryngology–head and neck surgery.

“Hopkins has the experience and resources to combine global health and policy, and had the foresight to realize that there are very few people who work in global health in our specialty,” she says.

Emmett wants to change how the world deals with hearing loss, both in helping individuals cope and in preventing hearing loss in the first place. Now in her fifth year of residency, she’s worked not only on her surgical and bedside skills, but also with colleagues in the Johns Hopkins Bloomberg School of Public Health to study what factors increase the risk for hearing loss in the developing world and to better understand the consequences.

“The burden of hearing loss is five to six times higher in developing countries than in the United States,” she says, “and the most affected regions of the world are the least equipped, with primary ear and hearing care rarely available.”

Recent studies by Emmett and Bloomberg colleagues suggest that poor nutrition in childhood can substantially increase the risk of hearing loss in adulthood. For example, the team found that vitamin A deficiency is an easily modifiable risk factor.

When Emmett finishes her residency in 2016, she’s hoping for a career that could change lives for the millions of people at risk of or currently suffering from hearing loss in developing countries. To that end, she’s also honing her leadership skills. She has served as both vice chair and chair for Johns Hopkins’ House Staff Council, the leadership body for the entire resident body of the hospital. She is active in the Coalition for Global Hearing Health, an organization that works to promote hearing health internationally. And through that organization, she’s gotten experience lobbying member states of the World Health Organization and the United Nations to get hearing loss more international visibility.

“By calling more attention to this important part of our specialty,” Emmett says, “we can truly make the world a better place.”