A Transformative Gift for Two Doctors 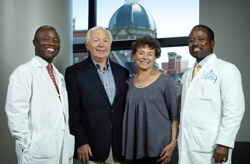 Many of the consequences of the accident healed over the next few months. But one serious problem lingered: The impact had damaged Joe’s seventh cranial nerve, which controls the facial muscles. As a result, the right side of his face had a persistent droop. Looking for the best place to treat his facial paralysis, Joe chose Johns Hopkins.

That’s where he met Howard Francis, an expert in skull base surgery who also directs the Johns Hopkins Listening Center. Although Francis identified the problem—damage to the tunnel that houses the nerve—surgery didn’t fix it, because the original trauma to the nerve was too severe.

Suggesting a different option, Francis referred Joe to Kofi Boahene, another member of the Department of Otolaryngology–Head and Neck Surgery with expertise in facial paralysis. Together, he and Joe decided to treat the problem with botulinum toxin, which requires quarterly injections that Joe still receives.

The appointments last only a few minutes, but it’s been enough time for Joe and Judy to learn about Boahene’s missionary work in Africa, where many countries lack expertise in facial plastic surgery.

The couple has long been active in giving in their community, making small donations to causes they care about. However, a seminar put on by their financial advisors made them re-examine their giving patterns. Classifying donations as either transactional (small gifts in response to a request) or transformational (larger gifts to make a bigger impact), the Franlins decided to hone their gifts to truly make a difference. Recently, the couple gave a significant sum to Johns Hopkins to split between Francis and Boahene, gifts that will impact the work both doctors do.

Francis plans to use his share of this gift to help fund two research projects: one to study how to improve literacy skills in children with cochlear implants, and another to study factors that predict the best outcomes in seniors who receive cochlear implants. Though both projects could help guide care at Johns Hopkins and beyond, neither is likely to qualify for limited federal research funding.

“These are both considered high-risk projects by most funding agencies,” says Francis. “There isn’t a lot of funding until our hypotheses are sufficiently proven, so we need donations like those from the Franlins to make it possible to get to that point.”

Boahene will use the Franlins’ gift to fund his medical missions. He recently completed a trip to Mexico and Rwanda, a country where only one facial plastic surgeon resides. Boahene hopes that by bringing teams that both provide care and train other physicians in these countries in plastic surgery techniques, he eventually won’t need to make these journeys.

“These funds,” he says, “really go a long way toward helping us establish training protocols and surgical skills that will last multiple generations.”