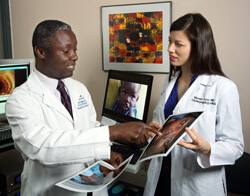 Fifth-year resident Myriam Loyo is originally from Mexico, and she’s traveled widely in Latin America, including to many developing countries. She thought she knew what to expect when she traveled to the Republic of Rwanda. The otolaryngology trainee suspected that Kigali, the capital, might be chaotic, loud or messy—after all, the country is still recovering from its 1994 civil war. But Loyo was surprised. The city was neat and orderly. The residents formed polite lines inside the airport and stores. No cars honked their horns in the street. Kids played soccer outside late into the evening. “You could even hear crickets at night,” Loyo remembers.

It’s clear that Rwanda has come a long way in the past several decades, she says, especially in medicine. For example, infant mortality rates are now on par with those of the U.S.

But in other areas, Loyo adds, Rwanda still needs some help. Though the country has a population of nearly 12 million, there is only one plastic surgeon: Charles Furaha, who practices at Rwanda Military Hospital in Kigali. Furaha provides outstanding care from head to toe for many patients each year, but there’s no way he can treat all who need his expertise, Loyo explains.

That’s why Johns Hopkins’ facial plastic surgeon Kofi Boahene and Loyo joined 14 colleagues from across the U.S. and Canada on a medical mission in February 2013.

The doctors, recruited by the Face the Future Foundation, spent weeks before the trip reviewing case notes and photos of patients that Furaha had selected for care during the mission. When they landed in Kigali, the whirlwind started. On the first day, they met with 36 patients to conduct their own exams and talk with the patients about the procedures they’d need. Then, for the next week, they performed operation after operation, with four operating rooms running from 8 in the morning until 7 at night.

The cases were “everything you can imagine,” Loyo says: a facial cleft in which even the nose was completely divided, a grenade injury that destroyed the lower half of a child’s face, a facial reconstruction necessary after cancer treatment.

Though the hospital was well stocked, the visiting doctors often had to improvise. For example, when electricity went out during an operation to remove a tumor, the surgeons had to use an old-fashioned saw to make complex bone cuts.

At the end, 36 patients who either wouldn’t have received care or would have had to wait an extraordinarily long time got the treatments they needed. “It made me feel really good about wanting to do reconstruction—that it was meaningful, it mattered,” Loyo says.

“Every resident who has been exposed to medical missions has had a light turned on that they cannot quench,” Boahene adds. “They become better physicians as a result of this experience.”

At the end of her residency, Loyo plans to continue surgical mission work.