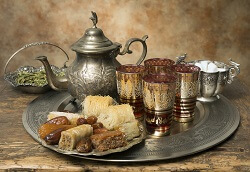 I’ve always found Lebanon to be an incredibly friendly, welcoming place. Some people in the U.S. are surprised when I say that.

All they know about Lebanon is what they hear on the news, and they end up picturing the country as a sort of war zone. But what you see when you go there is a beautiful country that reminds me of some of the prettiest parts of Southern California. And far from being a cauldron of mistrust and hostility, Lebanon is home to a population that mostly exudes warmth to strangers.

I’ve been there a few times in my position with Johns Hopkins Medicine International, working with Clemenceau Medical Center in Beirut in its preparations for accreditation renewal. Almost everyone I meet in Lebanon wants to make sure that I fall in love with their country. What have you seen so far?, I’m asked, over and over. There’s always something else I absolutely have to do. And they promptly take me to do it.

But the most frequent question I get, and my favorite, is: What would you like to eat? While the Lebanese are quick to open their homes to you for a family dinner, they also want to share their love of eating out in any of their wonderful restaurants. In Beirut, these run the gamut from the simplest kabob stand to elegant restaurants that serve endlessly elaborate, multicourse meals. I’ve never gotten so many dinner invitations—it’s as if my being left to fend for myself when it comes to a meal would be a national humiliation.

Even the restaurant owners and employees seem extraordinarily eager to make the best possible impression. I once revisited a restaurant I vaguely remembered from three years earlier. On walking in, I was loudly greeted with great enthusiasm by a man at the grill, who asked me if I wanted the same order as last time. I thought at first he was mistaking me for someone else, but it quickly became clear he remembered me from that one visit.

Eating together can also provide a window into the more private sides of people’s lives. At first, I felt a bit disconnected from those observing Ramadan, since shared meals had been such an important part of the bonding. But soon I started receiving invitations of a different sort, for iftar, the breaking of the fast in the evening.

One iftar invitation was particularly surprising—to celebrate it in my own hotel restaurant. One of my Lebanese colleagues, feeling it would be an imposition to drag me and another visiting colleague a few hours to her home, decided to bring iftar to us. This was no ordinary hotel dinner. Our host, in a low-key way, walked us through the entire ceremony, starting with drinking a very distinctive juice as the first intake of the day, and on through many small prayers and rituals around many different dishes. It was a remarkable and beautiful learning experience, one that makes you see many things in a different way: eating and drinking, the religion, the culture, the people.

But what stood out most to me was when our host reached into a bag and pulled out three lovely metal pots, placing them on the table. They were heirlooms that had been in her family for some 800 years, she explained. For an American who would feel lucky to own an heirloom that dated back 80 years, that time span was hard to comprehend. Such treasured heirlooms are normally kept in the home, of course, but iftar was an occasion that merited their display—to honor connections to family, ancestry and tradition. I had never before felt so at home in a hotel restaurant.

This woman hosted us twice more, in different restaurants. Each time, she brought out a different set of heirlooms, and no one in the restaurant seemed to think it strange to have these beautiful pieces on display. I couldn’t help picturing the stares I would get in an American restaurant if I pulled out a tea set, say, and plunked it down in the middle of a table.

But that’s part of the point of traveling, of course—experiencing the things you can’t experience back home. And when you get to go beyond what tourists normally do and are exposed to the more personal elements of a culture, it’s an especially enriching thing.