Patient Safety Has No Borders 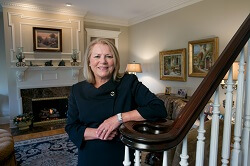 Karen Timmons was touring a hospital in India when she noticed a box covered in aluminum foil on one of the wards.

She asked a doctor about it, and he explained that it was the repository for fines assessed on hospital workers—prorated according to salary and rank—each time they were caught failing to wash their hands. When the box was filled, everyone on the ward would go out to lunch. “I thought, ‘Wow, they’re doing something about hand hygiene,’” she says, and that made her very happy.

Safe and effective health care is in the details. And no one is more passionate about those details than Karen Timmons, who has served more than 30 years at the vanguard of a movement to establish uniform standards for patient care and safety around the globe.

At the Joint Commission, the leading accreditation agency for U.S. hospitals—where Timmons started working, fresh out of school with a master’s degree in counseling, back in 1976—she helped build from scratch (and eventually ran as CEO and President) the Joint Commission International (JCI). The JCI was unique in recruiting experts from around the world to create accreditation standards that could be applied internationally, taking cultural differences into account without sacrificing quality of care. It became the gold standard of international hospital accreditation.

Timmons recognized early on the importance of collaboration and was never content to do her work solely through the JCI. “One organization can’t do everything alone,” she says. “It’s important that organizations be very generous with sharing their knowledge.” She worked with the World Health Organization to get other people in health care fired up about patient safety and chaired the resulting committees, just as she served on the board of ISQua, the international agency that accredits the organizations that accredit hospitals.

“Karen has helped set an agenda for patient safety globally, and that’s a huge deal,” says Susan Frampton, president of Planetree, a nonprofit that advocates patient-centered care. (Timmons also serves on the Planetree board.) “She’s done a lot of work making patient safety a priority and embedding it in the standards used to accredit health care organizations around the world.”

In Timmons’ view, there can’t be too much accreditation. A million people die every year from surgery complications, and one in every 10 patients is harmed as a result of medical error. “Accreditation is a risk reduction activity,” she says. “By complying with standards—which means you are conforming to the best evidence-based practices—you have a much greater likelihood of good outcomes.”

Her passion for standards and safety found a new and potent platform in 2010, when she left JCI for Det Norske Veritas (DNV), a Norwegian firm that has specialized in safety and risk reduction for 150 years. DNV began as a group of maritime insurance companies that inspected and evaluated Norwegian merchant vessels and offered discounts to ships with the best safety records. Now, they advise and certify companies engaged in health care.

“It’s exciting, because DNV knows a lot about the science of safety and how to manage risk,” says Timmons, who is now the company’s global health care business director. “We’re relatively new to health care, but we have an incredible infrastructure, with 500 offices in 100 countries and 18,000 employees. The staff is truly international. Often I’m the only American in the room.”

In every country they serve, there are local employees, people who speak the language and understand the culture. “So it’s easier to share information, to provide hospital accreditation services, without the cost of bringing in experts from the U.S. and interpreters to translate for them.”

The bottom line, though, is that DNV specializes in the thing at the heart of Timmons’ dream for health care—international and uniform safety standards.

“In other industries—transportation and nuclear energy, for instance—the need for international standards was recognized early on. There was research and analysis, and the implementation of best practices and the resulting standards were mandated by countries worldwide,” she says. “This is in stark contrast to the health care industry, where the culture has traditionally been more individualistic and hierarchical. You still have hospitals with different standards and codes operating on the same street, for instance, and though this is definitely changing, there are still challenges.”

Take something as apparently simple as persuading medical workers to properly wash their hands. “Despite incontrovertible evidence that it saves lives—and we’ve put out a lot of solutions; Johns Hopkins’ bundled approach that has been proven to reduce infections, for instance—we’re still struggling with hand hygiene compliance,” says Timmons. “It’s so frustrating, when you think that Florence Nightingale was talking about soldiers dying not from their wounds, but from infections during the Crimean War.”

And this is not a developed versus undeveloped world problem. “No country has solved this,” she says. “Patient safety has no borders.”

In fact, Timmons firmly believes that developed countries can learn a lot from developing countries—the low-tech solution to the handwashing problem she witnessed on that ward in India, for example.

Poorer countries may not have as many resources—she has seen heartbreakingly long lines at clinics, lines in which patients die, waiting to see a health care worker.

“But there is a lot to be learned from every culture,” she says. “In Asia, for instance, it is expected that when someone is hospitalized, the family will be there round-the-clock. They might even cook, and some hospitals have areas for prepping the food. This aligns with the kind of push for more patient-centered care that Planetree has been advocating for years.”

In Thailand, there is a cultural intolerance for lines, and medical establishments manage their caseloads so patients don’t have to wait. “We’ve gotten better about this in the U.S., but we need to continue to learn from one another,” she says. “When you’re working in a global business, you need to undertand that it is a two-way street.”

Timmons is a visionary, says Frampton. Former colleagues at the Joint Commission say she is a brilliant businesswoman and manager, works extremely hard—one friend says they used to joke about not getting an email from Timmons for nearly 12 hours, but only because she was almost certainly on a plane to China—and cares deeply about what she does.

Timmons says she is simply lucky. “I’ve been incredibly fortunate to work with two outstanding organizations, both with smart, committed teams and very high standards,” she says. “And I am even more blessed to have a truly great and supportive family, my husband, Rich, and our three daughters, Erin, Kelly and Shannon.”

But Frampton sees something beyond luck behind Timmons’ achievements. “She has a gift for seeing things from a broad global perspective. She is warm and approachable, she listens, and she has a remarkable ability to figure out how to apply standards in culturally sensitive ways. She may be a U.S. citizen, but I think of her as a citizen of the world.”

Patient Safety by the Numbers

Joan Katherine Cramer is a freelance writer based in Chestertown, Maryland.