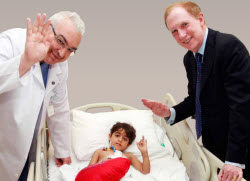 In a gracefully sprawling hospital perched on the hilly outskirts of Istanbul, Robert Kiely makes his rounds several times each week. A tall man with strikingly red hair, Kiely pokes his head into every room on the pediatrics ward to offer a bit of conversation. Some of the children are too weak to do much more than smile, but most can sit up and answer a few playful questions. The parents—mostly mothers—seem eager to chat, and there are sometimes happy tears.

“These were dangerously ill kids who are now on the road to recovery. The smiles I get from their mothers make my day,” says Kiely, CEO of the Anadolu Medical Center, where the pediatric ward includes more than two dozen children who have been flown in with life-threatening conditions.

The children mostly come from Iraq, Turkey’s neighbor to the southeast, and a country whose health care infrastructure was partly shattered and overtaxed by years of strife. Those children with serious heart conditions often had little chance of getting the complex surgery that could save their lives. So the Iraqi government partnered with Anadolu on a program that brings about 30 of these children to the medical center each month to get the advanced procedures they needed. Some of them are as young as 6 weeks old.

Kiely notes that Anadolu’s responsibility to these young patients, and to all the patients in its 209-bed facility, goes far beyond providing needed treatments. It also involves giving them what they need to feel fully cared for.

The question of how a medical institution can best go above and beyond for patients was on a lot of people’s minds in Istanbul in 2002, thanks to a rare opportunity to create a world-class hospital from scratch. The project was the vision of Kamal Yazici and Izzet Özilhan, successful industrialist partners who became the founders of Turkey’s venerable Anadolu Foundation. Having occasionally traveled to the U.S. to receive top-notch medical care at leading academic medical centers there, the two became determined to create a nonprofit hospital that would make the same sort of care available to Istanbul and the entire region.

From the outset, design and planning teams asked hundreds of patients, clinicians and administrators to share their ideas on what would make for an ideal facility and hospital experience from the patient’s point of view. The resulting information was carefully analyzed and incorporated into the planning and design, recalls Kiely, who led several health care organizations in the U.S. over a span of two decades before coming to Turkey to take over the reins of the new medical center.

Anadolu, designed and operated in collaboration with Johns Hopkins Medicine International, opened its doors in 2005. The hospital’s physical presence immediately provided one thing that patients had said they wanted: a beautiful, calming place to be. Light pours into the building through skylights, and ocean views are offered through giant windows in the lobby, through corridors and in other common areas. Patients said they wanted close attention, so Anadolu’s patient care areas were designed to keep nurses close to and in constant sight of patients through placement of nursing stations and glass walls. They also wanted privacy, so even patients getting treatments, such as chemotherapy, that are usually provided in common areas are provided in private rooms at Anadolu.

And patients said they looked for respect and understanding of their different cultures. That’s particularly important at Anadolu, since almost one-third of its patients come from outside of Turkey. Istanbul is situated on the edge of both Asia and Europe, leading to sharp variation among patients in everything from language to tastes in food, and the hospital tries to accommodate everyone’s differing needs.

As the hospital’s top executive, Kiely feels personally responsible for ensuring that patients and families feel good about their experience at Anadolu. “I go on nonmedical rounds every day just to talk to them,” he says. “It’s the only way I can make sure we’re staying in touch with their needs.”

One of the most telling details is whether or not he gets smiles from the patients and their families. He usually does. “I measure our success in those smiles,” he says.