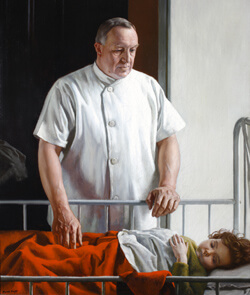 This commissioned portrait by Harold Knight depicts William S. Baer checking on 3-year-old Ann McGregor Boyle. Since birth, she suffered with dislocated hips. Baer’s surgery proved successful, and following her recovery, Ann unveiled the portrait to honor her doctor. The portrait was a gift to the hospital from Baer’s friends.

In 2014, Johns Hopkins’ Department of Orthopaedic Surgery will celebrate its 100-year anniversary—a feat that would not have been possible without its founder, William S. Baer.

A giant of a man, Baer very much lived up to his name, says Johns Hopkins orthopaedic surgeon Charles Silberstein. But with his profound love of children and gregarious personality—Baer gave out presents to all his young patients come Christmas—he was more teddy bear than grizzly.

Besides his expertise as a surgeon, Baer was also one of the first orthopaedic researchers. While serving in World War I, Baer noticed that open wounds on soldiers healed faster when infested with maggots. He, like other doctors, suspected that the maggots ate away dead tissues. But Baer took that observation a step further and began actively researching the medicinal properties of maggots upon his return stateside. “He grew maggots on raw meat so he could observe their effect on destroying tissues,” Silberstein says, adding that he set up the experiment in the hospital’s dining hall—an unfortunate location for unwitting visitors. Today, the BioTherapeutics, Education & Research Foundation, a biotech company in Irvine, Calif., is continuing research into maggot therapy.

Baer’s influence also turned Hopkins into a leader in sports medicine. The first doctor who came to work with Baer after he opened his private practice was an orthopaedic surgeon by the name of George Bennett. Bennett was a semiprofessional baseball player who developed an early interest in throwing injuries. He later treated many major league players, including Joe DiMaggio. Hopkins’ leadership in sports medicine has continued to the present day.

Silberstein himself joined Baer’s private practice in 1971. There he met Irene Dodson, the office manager who started answering phones for Baer when she was just 12 years old, and her sister Pearl Johnson, a longtime nursing assistant. The two women continued to work at Baer’s practice into their 90s, thus passing down Baer’s history to Silberstein. Interestingly, when Silberstein joined the practice, his father realized that Baer had treated him (he was a polio survivor) when he was a teen.

Given his long and colorful life saga, says Silberstein, today “the Baer DNA is probably present in the genome of most orthopaedic surgeons.”