Framework - Getting Ahead of the Curve: A Fresh Take on Scoliosis

Getting Ahead of the Curve: A Fresh Take on Scoliosis 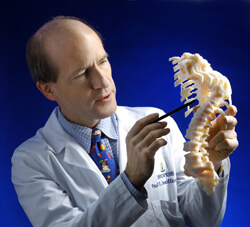 Paul Sponseller treats children from all over the world with spinal deformities and rare disorders. Of the more than 550 surgeries he performs each year, almost a quarter of them are for scoliosis.
photo by Keith Weller

Most schools are no longer performing routine scoliosis screenings on students, but that doesn’t mean that the condition is any less prevalent. “There are just as many cases of idiopathic scoliosis as ever,” says Paul Sponseller, director of the Division of Pediatric Orthopaedic Surgery at The Johns Hopkins Hospital.

Sponseller says that testing for scoliosis at school—which consists of a simple visual screening that is not as accurate as an X-ray—picks up too many children, many of whom only have small spinal deviations and are sent for unneeded X-rays and treatment. “Most states have stopped requiring school screenings, so it’s now incumbent upon pediatricians to do the testing,” he adds.

While Sponseller has found that the decline in school screenings has not had a major effect on his practice, there are a few patients who come to see him later than they should. Spinal curves can progress greatly during a growth spurt, and because teenagers tend to be very private, a dangerously delayed diagnosis could ensue. “If the curve is picked up too late, says Sponseller, it may be bigger and the surgery riskier.”

Fortunately for those patients, Sponseller is no stranger to the risky—or rare. He treats children from all over the world with spinal deformities, like scoliosis, kyphosis and spondylolisthesis, as well as other, rarer disorders, like clubfoot, Perthes disease, Marfan syndrome and bladder exstrophy. Sponseller performs more than 550 surgeries a year, almost a quarter of them for scoliosis.

Despite intensive genetic research, he says, scoliosis’ cause remains unknown. “Once we understand the basic cause of the curvature, early medical or physical intervention may hold promise,” he says. Less invasive means may involve better bracing and correction without fusion—two methods Sponseller and colleagues are working to perfect. The team has also developed better surgical approaches, including the use of improved anchors (screws) and techniques to make the bone deformity more correctable. For example, they have developed a better means of pelvic fixation, called sacral alar iliac (SAI) fixation, which is stronger, more low-profile and versatile than other fixation techniques.

One nonsurgical method that doesn’t seem to work is exercise. “The biggest misconception about scoliosis among patients is that exercises will help keep scoliosis from progressing,” says Sponseller. “In fact, there’s no evidence that they do.” On the other hand, not all cases of scoliosis worsen with time. “Expertise is needed to determine which cases will worsen and need treatment versus those that will not,” says Sponseller.

A DNA test that claims to help doctors determine whether a spinal curve will worsen involves a saliva sample that gives a score from 0 to 200. A low score means a curve is unlikely to worsen while a high score means the curve may become severe, requiring treatment in the near future. Still, the test is not as precise as Sponseller would like. “I hope further refinements are coming,” he says, “but they are expensive to develop.”