Framework - Building Rapport Is the Name of the Game

Building Rapport Is the Name of the Game 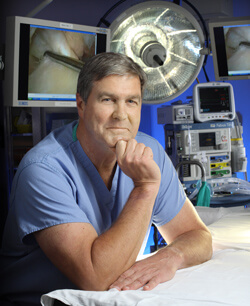 As any orthopaedic surgeon can attest, athleticism carries risk: Sprains, fractures and dislocations loom large for this population. But the stakes are especially high when it comes to operating on professional athletes, says Johns Hopkins orthopaedic surgeon John Wilckens. In those cases, he is more conservative than he might be for the average patient.

“We are very, very slow to operate on athletes,” he says. “If you look at the demand on the elbow and shoulder of a pitcher, for example, having a 50 percent chance of returning to the same level of play doesn’t sound very good. With non-athlete patients, I can give them a 95 percent chance of getting better, with a 5 percent chance of complications.”

Yet this conservative approach, explains Wilckens, comprises only a fraction of his role. Preventing injury in the first place, he says, is 95 percent of his job. “We try to identify players at risk — someone who has a stiff hip or a weak shoulder. We try to avert injury.” The other 5 percent is surgery, with knee arthroscopies and ACL reconstructions (on athletes and non-athletes alike) the most common operations he performs.

Teaching prevention to die-hard athletes can be daunting, but Wilckens demonstrates a natural rapport with ambitious, competitive and, often, young people. Perhaps that’s because he teaches Department of Orthopaedic Surgery residents with those very same traits and has been recognized for the positive impact he’s made on them. More than once, they’ve named him Teacher of the Year.

Wilckens adds that he encourages all of his patients — professional athlete or not — to get second opinions. Often, prevention of injuries and seemingly inevitable surgeries on professional athletes is as simple as just “being there” for them. “My job is about keeping these kids upright and on the field, playing effectively,” Wilckens says. “You can’t do that in the operating room. You’ve got to get in the clubhouse; you’ve got to get in the dugout.”