Framework - Boning Up on Bone Loss

Boning Up on Bone Loss 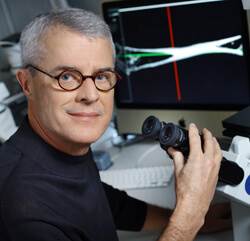 The overarching goal of Thomas Clemens’ research is to identify the cellular and molecular mechanisms that control skeletal development and repair.
photo by Keith Weller

To figure out why some people are prone to lose more bone than others as they age, bone biologists like Thomas Clemens, director of research in Johns Hopkins’ Department of Orthopaedic Surgery, are gathering clues from patients with rare genetic disorders.

The first line of defense against the common scourge of osteoporosis, which affects more than 10 million Americans, has been medication to stop the breakdown of bones. But those treatments aren’t perfect, especially in the long term. So the search is on for drugs that will halt bone loss and speed up the natural process of regeneration.

No longer does it make sense to throw a bunch of known chemical compounds at cells in a laboratory to see if one of them repairs the problem at hand. Scientists are now working smarter, thanks in part to how inexpensive it has become to sequence an entire genome to look for genetic mutations. It can take a couple of blood samples, just $10,000 and a few months’ work to find the right target. Then Clemens and his lab team can create mice with the mutation to test compounds that make sense, offering the best chance at success.

Clemens is looking at the needles to determine how to repair the haystack.

“By studying and identifying genes and pathways that are defective, we can turn them around to our advantage,” says Clemens, editor of the Journal of Bone and Mineral Research. “The more we know, the better we’re going to be at developing new drugs to maintain and build stronger bones.”

Take the example of a family that got into a serious car crash. Some relatives suffered massive broken bones. Others were relatively unscathed. Why the difference? It turned out that some family members had a rare genetic disorder that made their bones so dense that they would sink rather than swim in a pool, so strong as to be nearly indestructible. When researchers studied the genome of relatives with and without the disease, they picked up on a genetic mutation that helped explain this phenomenon—and turned the knowledge of this finding into a drug that is now in phase III trials.

Clemens and his colleagues have recently been working with osteogenesis imperfecta type VI, the rare, brittle bone disease caused when too much calcium is put into the matrix of collagen and calcium phosphate that makes up bone. They’ve analyzed the DNA, easily locating the genetic mutation in a new protein, and created mice with brittle bone disease. Now they’re studying these mice to figure out how to undo the effects of the disease, hoping to turn their findings in a rare disease into a drug that can reverse the bone damage of the all-to-common osteoporosis.