Framework - Back in the Saddle After Spinal Surgery

Back in the Saddle After Spinal Surgery 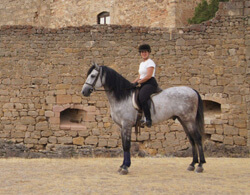 1 2
Anne Fink, a financial advisor, visited Spain one year after spinal surgery and was able to go horseback riding—one of the many things she had given up prior to having surgery.

Anne Fink made spinal surgery look like a walk in the park, but she will be the first to tell you it’s because of Johns Hopkins spine surgeon Khaled Kebaish. “Thanks to him, I’m a walking medical miracle. He gave me my life back,” she says.

When Fink was in high school, she was diagnosed with scoliosis and wore a back brace for three years to straighten her spine. For more than two decades after graduation, she lived symptom-free, but in 1996, she started experiencing sporadic back pain. In 2009, it significantly affected her lifestyle.

She remembers exactly when the horrific pain began. “I was horseback riding on a trail in the country and thought, I don’t know how I’m going to get off this horse,” she says. “I thought the pain would fade but it didn’t.”

After that, Fink had to give up not only horseback riding, but skiing, rollerblading and traveling, too. She began visiting doctors and surgeons but says she wasn’t comfortable with any of them. “I just didn’t feel confident about what they were telling me,” she says. “They didn’t seem to understand my particular spine curvature.”

One day, while speaking to her lawyer, Fink mentioned her pain. Her lawyer recommended she meet with a friend of his who offered medical consultations.

Following her attorney’s advice, Fink spoke with the doctor, who referred her to Dr. Kebaish. The first time she met Kebaish, Fink says she felt at ease. “He was focused solely on me, my well-being and the science of medicine,” she says. “I believed he would use his skills and expertise to help me.”

In the summer of 2011, Dr. Kebaish performed two extensive back surgeries to straighten Fink’s spine. She and her children went dogsledding in New Hampshire the following winter to celebrate the successful outcome and her complete recovery.

“Dr. Kebaish gave me a second chance,” she says. “I’m thrilled because I am pain-free and back to the activities that I love. I’ve even added yoga, cycling and exercising at the gym to my weekly routine.”

In winter 2015, Fink spent a week in Barcelona, Spain, with her son. “We walked miles and miles and crisscrossed the city multiple times,” she says. “I would not have been able to do that before my surgery.”

Even though it’s been a few years since she suffered with chronic pain, Fink says she doesn’t want to forget where she came from. Because of that, she has made financial contributions in support of Kebaish’s research on surgery for spinal deformities.

“Where I am today is because of Dr. Kebaish,” she says. “I am delighted to have the opportunity to further his work so he can help more people with situations like mine.”

The Johns Hopkins Department of Orthopaedic Surgery provides outstanding treatment of musculoskeletal disorders, fosters innovation and nurtures the next generation of orthopaedic surgeons. Our physician-scientists are leading the nation with ground-breaking research and innovations in patient care.

Your support for our research or the work of your doctor will help us better diagnose, treat and cure disabling conditions such as scoliosis, osteoporosis, arthritis, trauma, bone cancer and soft tissue disease.

To help us through a tax-deductible gift, please visit www.hopkinsortho.org/philanthropy or call 410-955-6936.