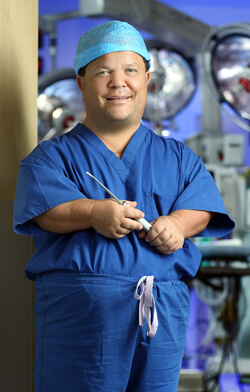 Six-year-old Chael Sandoval wakes up with the sunrise to wander outside for one of his favorite activities: visiting his family’s horses, goats, ducks and chickens. Just two years ago, however, Chael couldn’t walk more than 100 feet without the pain of claudication stopping him.

At the time, Chael’s mother was seeking an orthopaedic surgeon with experience treating patients with achondroplasia, like Chael, for whom spinal stenosis is a common complication. At a conference held by Little People of America, she met Johns Hopkins orthopaedic surgeon Michael Ain.

Ain started treating patients at Johns Hopkins in 1995 and gained insight working with Johns Hopkins pediatric neurosurgeon Ben Carson. During this time, Ain noticed how pediatric patients with achondroplasia would develop kyphosis within a year or two of having a laminectomy to remove the bone squeezing the spinal canal. “I realized that these children needed a different operation than adults with the same symptoms,” he says. “They needed a spinal fusion to correct the kyphosis and keep it from getting worse.”

In a study published in 2006, Ain showed that adults with achondroplasia can have successful multiple-level laminectomies to correct stenosis without requiring a fusion but that the same procedure in children results in kyphosis. “For pediatric patients, we do a fusion at the same time and we use pedicle screws and rods,” he says. “Unlike wires and hooks, screws take up less space and the results are exponentially better from a neurofunction and a fusion point of view.”

After examining Chael, Ain recommended a laminectomy and fusion. The procedures were completed in May 2013. Now Chael can walk, run and jump around his family’s farm. Despite Chael’s success, Ain cautions, “That’s not to say that in five or even 50 years he’s not going to get stenotic symptoms at a higher level in his spine. The surgery fixes it, sometimes permanently, but you can still develop a problem elsewhere.”

Ain and neurosurgeon Daniele Rigamonti published a study in 2000 that showed even though stenosis can recur in patients many years after a surgical decompression, repeating the operation can lessen patients’ pain and neurological symptoms.

“Even if patients have had previous surgery and had poor outcomes, it doesn’t mean that another operation can’t be successful,” says Ain. “It’s a more challenging surgery, but it can still have a successful outcome.”