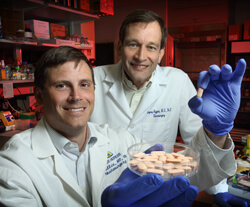 Gallia, left, and Riggins found what they’d been looking for with mebendazole.
Photo by Keith Weller

A serendipitous finding in lab mice made by research professor Gregory Riggins and neurosurgeon Gary Gallia is creating excitement as a possible treatment for glioblastoma, an aggressive brain tumor.

Riggins’ lab is known for discovering cancer-causing gene mutations and for assessing new drugs at the preclinical phase. Ordinarily, he and his colleagues have no trouble triggering glioblastoma cells to proliferate in mice. But over the course of several months in 2009, they encountered one group of mice in which the tumors would not grow. After some investigating, the scientists discovered that the mice had been treated with the veterinary antiparasitic drug fenbendazole.

Searching the literature, they found reports that fenbendazole had been shown to inhibit cancer growth. Then, by trial and error, they determined that the related drug mebendazole—which has been used for the last 60 years to treat parasites in the human gastrointestinal tract—might also hold potential for stalling glioblastoma.

“We screened a lot of drugs in this family of compounds, and it was mebendazole that worked best,” says Gallia. “This is what we’d been looking for.”

With that, Riggins, Gallia and their research team launched a program to understand the drug, improve its effectiveness against glioblastoma cells and have it manufactured for testing in patients. “The drug company that previously supplied mebendazole in the U.S. was no longer manufacturing it,” says Riggins, adding that they finally found a company in India that could supply the quantities they’d need for a clinical study. The scientists believe the drug helps obstruct tumors by inhibiting formation of strands of tubulin—proteins needed by cancer cells to grow.

Glioblastoma is a fast-moving cancer. “Average survival is 15 to 20 months,” says Riggins. “We’re trying to improve therapy as quickly and strategically as we can.” The Johns Hopkins team is at a critical juncture now—a phase I clinical trial with 24 patients to determine the drug’s safety. “We are using the highest dose allowed by the review boards of Johns Hopkins and the Food and Drug Administration, and patients are tolerating it well,” Riggins says of the study, which is about 50 percent complete.

“At best, the drug will slow tumor growth,” says Riggins. He and his team are looking to pair it with other drugs. They expect that their formulation of mebendazole will also work in pediatric cases.

Challenge: To find an effective drug to combat glioblastoma, an aggressive brain tumor.

Approach: Riggins and Gallia are using mebendazole, a drug in the family of compounds that includes fenbendazole, a veterinary antiparasitic that had serendipitously been discovered to prevent tumor growth in lab mice.