Doorways to Discovery - Strength Under Pressure 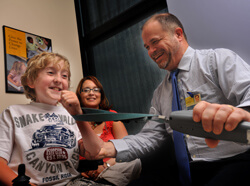 Tom Crawford, a specialist in childhood motor neurons, has a long history of caring for children with spinal muscular atrophy (SMA). He has treated more than 325 patients in his 30 years in the field. He also participated in the discovery of the SMA gene, testing new treatments and developing care guidelines.

Currently, he’s working to standardize an approach to test the impact of experimental therapies for SMA—and he’s making it entertaining.

“SMA is just one part of life,” he says. “Children with SMA are bright, alert and attentive kids. I want to make sure they don’t forget to live well. To me, that’s job number one.” When his patients come to participate in clinical trials, “they laugh, learn and accomplish.”

Crawford engages his patients who are old enough in what he calls a “rather quaint” approach to testing muscle strength. It involves a strength gauge that’s specially designed to appeal to the kids’ competitive and fun-loving spirit. “It has to be fun for kids to cooperate,” he notes. Through use of the gauge, Crawford is collecting thousands of pieces of unique data that shed light on the course of neuromuscular decline in SMA, to which treatment outcomes can be compared. “If we can understand decline, then we can understand what improvement looks like,” he says.

“SMA has gone from the least hopeful to the most hopeful in the entire world of neurologic genetic disease,” says Crawford. He adds, “I always wanted to make a difference. When I saw my first patient with SMA, I knew this was exactly the place for me.”