Doorways to Discovery - New Hope for Patients with SMA

New Hope for Patients with SMA 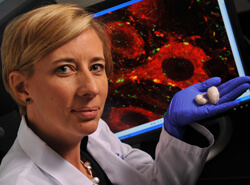 In a day and age when so many people are walking, running and in other ways exerting themselves for the sake of fitness, people with spinal muscular atrophy, or SMA, live in sharp contrast in their hope to simply stand or even sit upright.

SMA adversely affects the nerve cells (motor neurons) of the spinal cord that we need to maintain and control muscles for posture and physical activity. The most common genetic cause of death in infancy, SMA is classified into three types based on severity. While patients with less severe forms can live with it for years, babies born with the most severe form, type 1, usually die before their second birthday.

Fortunately, says neuromuscular disease specialist Charlotte Sumner, there is hope on the horizon. “We are closer to a treatment for SMA than for perhaps any other inherited neuromuscular disorder.”

Sumner is investigating how a mutation in the survival motor neuron 1 (SMN1) gene causes SMA, possible therapies for preventing SMA’s harsh consequences and the optimal timing for starting treatment. Mouse studies show that timing could be critical. “The motor neurons in SMA go down a path to cell death. We want to catch them while they are still capable of functioning,” she says.

The strategies that Sumner and her colleagues in the field are pursuing include examining compounds that will increase the presence of a protective protein produced by a related and omnipresent gene called SMN2. Research shows that having more SMN2 can override some, if not all, of the effect of a defective SMN1 gene. Sumner and her lab colleagues did one of the first studies showing that a drug that increases SMN expression could improve the motor ability of mice.

“The big challenge is to achieve a similar effect in humans,” says Sumner. They are working with pharmaceutical companies to develop and test several of the most promising compounds. One, an antisense oligonucleotide (ASO), is in an early-phase trial to assess the safety, tolerability and optimal drug levels of the compound in infants with type 1 SMA.

“Patients with SMA and their families are deeply committed to fully living life and learning all they can about the progress we’re making,” says Sumner, who recently participated in an annual meeting of patients, families, researchers and clinicians. “A mother was telling me how much her son loves wheelchair ice hockey. I have never been more optimistic that before long—hopefully in less than five years—we will be offering children like him an early treatment that keeps motor neurons alive and muscles growing, and that paves the way to an active and long life.”

Challenge: To find a treatment for the genetic disorder SMA.

Approach: Sumner wants to increase the production of a protective protein.

Progress: Clinical trials are underway for testing the effect in humans of an ASO compound that kept motor neurons alive in mice with SMA.