Doorways to Discovery - Changing the Future of Aging

Changing the Future of Aging 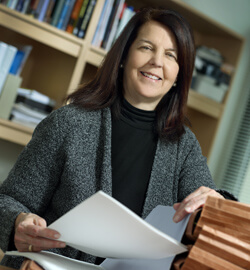 Cognitive neuroscientist Marilyn Albert and her collaborators measure these proteins in cerebrospinal fluid (CSF), use sophisticated MRI brain imaging techniques to study affected brain regions, and draw parallels between their findings and the progression of cognitive decline.

Most recently, she and colleagues at Johns Hopkins studied several hundred people, most of whom were first evaluated when they were middle-aged and symptom-free. About one-fifth have progressed to mild cognitive impairment or dementia. The researchers are looking for markers in normal individuals that predict who will develop symptoms many years later. Why? So treatment regimens can be started at the optimal time—not too late and not too soon for the best effect. Baseline ratios of amyloid and tau in CSF, as well as measures on MRI scans, appear to be good predictors.

“We think that current drugs for Alzheimer’s disease might be failing because the timing is off. And we think that the markers from CSF or from brain imaging will tell us when to start treating,” says Albert.

She is director of the Alzheimer’s Disease Research Center at Johns Hopkins and of this project, known as BIOCARD. Recently re-funded by the National Institute on Aging, she and her colleagues are expanding their evaluations to include several innovative new procedures.

“When better treatments become available, combined with early diagnosis, we could help change the course of Alzheimer’s and the future of aging.”

Challenge: To predict who will develop Alzheimer’s disease and begin to treat them before it is too late.

Approach: Albert is identifying markers of Alzheimer’s in its earliest stages.

Progress: Tests are showing that amyloid and tau in cerebrospinal fluid and measures on MRI scans in nonsymptomatic individuals are helpful in predicting who will develop symptoms many years later. Additional work is needed to improve the accuracy of prediction.