Doorways to Discovery - A Stimulating Approach to Alzheimer’s

A Stimulating Approach to Alzheimer’s 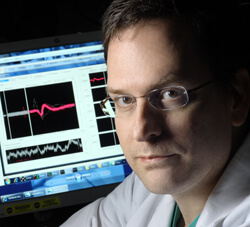 Several years ago, doctors in Toronto set out to quell the appetite of an extremely obese patient by electrically stimulating his brain’s appetite center via deep brain stimulation (DBS). A surprise effect—DBS elicited old and vivid memories—has given rise to a new strategy for slowing cognitive decline in people with Alzheimer’s disease.

DBS is now being tested in 42 patients with early-stage Alzheimer’s disease in a clinical trial at Johns Hopkins and six other leading North American research centers. The ADvance Study is led by psychiatrist Constantine Lyketsos, director of the Johns Hopkins Memory and Alzheimer’s Treatment Center, and neurosurgeon Andres Lozano of the University of Toronto. Preliminary studies carried out in Toronto suggest that stimulating the hippocampal fornix—the brain’s memory center—can release memories of specific events and also improve the brain’s use of glucose, which is significantly reduced in early stages of Alzheimer’s.

“An Alzheimer’s disease pandemic is inevitable, and we need new therapies if people are to retain a good quality of life,” says Lyketsos. According to the Alzheimer’s Association, more than 5 million Americans currently suffer from Alzheimer’s, and that number is expected to reach 16 million by the year 2050.

William Anderson is the Johns Hopkins neurosurgeon who performs the delicate DBS operation, which he’d previously done hundreds of times in patients with Parkinson’s disease to calm their tremors. “But this was a slightly different operation,” he explains. “To reach the fornix, the wires had to traverse the tough walls of the brain’s fluid-filled ventricles, which sometimes resist passage.”

Patients undergoing DBS carry a pacemakerlike stimulator implanted just under the skin. An electrode extends from it, painlessly, to the brain. Half of the patients in the ADvance Study had the DBS devices activated two weeks after surgery, while the remainder will have the device turned on after one year. All will be regularly assessed for at least 24 months to measure their rate of Alzheimer’s progression.

“The study participants have very mild dementia,” says Lyketsos. “We want to be able to attenuate their disease process so that fewer ever get to the more advanced stages.” The researchers expect to have their answers in 2015. If the study’s outcome supports the safety of DBS in Alzheimer’s patients and suggests some efficacy, researchers will undertake a new set of studies to test optimal rates, dose of stimulation and placement of wires, since the electrode has multiple tips that can be turned on in various combinations.

Challenge: To slow Alzheimer’s symptoms and the disease’s spread in the brain so that fewer patients experience the most severe stages of the disease.

Progress: DBS is being tested in a clinical trial at Johns Hopkins and six other leading North American research centers.