Doorways to Discovery - A Reversible Form of Dementia

A Reversible Form of Dementia 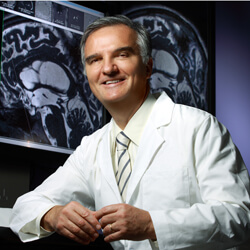 “Reports indicate that as many as five out of every 100 people older than 65 who are diagnosed with Alzheimer’s disease, Parkinson’s disease, other forms of dementia or problems with balance could actually have a reversible form of cognitive and motor deterioration,” says neurosurgeon Daniele Rigamonti, an expert in the field of normal pressure hydrocephalus (NPH).

In NPH, the brain’s ventricles overfill with cerebrospinal fluid (CSF) because of an obstruction in the normal CSF drainage system. “The excess CSF causes the ventricles to expand and the brain to become compressed in a way that causes stereotypical signs of impairment,” he says. These signs include poor balance, a wide-based gait, attention and short-term memory problems, urinary urgency, and frequently, urinary incontinence.

If NPH were diagnosed early enough, before brain damage is permanent or extensive, a surgical intervention to shunt the CSF past the obstruction could help about 90 percent of patients with the condition, says Rigamonti, who is developing a new tool to hone the diagnosis.

When a patient is suspected of having NPH, a typical workup includes a spinal tap for draining off enough CSF to temporarily relieve the pressure on the brain. “If the symptoms decrease after the spinal tap, then we know we have a good chance of reversing the downward trend,” Rigamonti notes. The body naturally replaces the removed CSF, starting the buildup of pressure over again.

Rigamonti believes that the best judge of improvement after the spinal tap is probably not the medical staff watching the patient walk through the clinic hallways, but rather the patient and family in their own home full of obstacles. “The tool I’m working on is a system that they can use to record their observations. We are seeing that the more certain they are of improvement, the better the surgical outcome. Our predictions for surgical success are being informed by these preoperative evaluations,” he says.

Rigamonti says that final data on the efficacy of the tool should be collected in a matter of six months. This will assist doctors in selecting the best candidates for surgery and help patients understand their chance of improvement, he notes.

Rigamonti would like more family practitioners, internists and neurologists to consider NPH in older patients who are evaluated for a fall, particularly if brain imaging suggests enlarged ventricles. “It is the only form of dementia that gets better, so there is a huge potential for improving quality of life,” he says.

Rigamonti is the editor of a comprehensive new book for medical professionals, Adult Hydrocephalus, and he is working on another for patients and families.

Approach: Rigamonti is developing a home test to assess cognitive and motor skills improvement following removal of a small amount of cerebrospinal fluid in patients being evaluated for NPH.

Progress: The home test is being evaluated for efficacy.