Doorways to Discovery - A Dietary Solution to Extreme Epilepsy

A Dietary Solution to Extreme Epilepsy 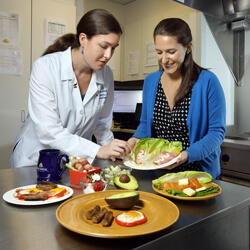 Each year, about a dozen patients land in the Johns Hopkins neurosciences critical care unit with an often fatal condition called super-refractory status epilepticus (SRSE) related to conditions like stroke, traumatic brain injury, infection or tumors. The challenge for doctors is to quiet the extreme electrical storm in the brain, which can mean putting the patient into a medically induced coma.

The quiet has been hard to maintain, and about 40 percent of patients have traditionally died from SRSE. Until now, that is, thanks to an “Aha!” moment in which neurologist Mackenzie Cervenka and childhood epilepsy expert Eric Kossoff realized that they could potentially make an impact on SRSE based on what they know about dietary management of epilepsy in children.

“We thought it might be possible to control SRSE using an adult-sized version of a special ketogenic diet that works in kids,” says Cervenka. The diet mimics starvation by making the body burn fat, but it still provides necessary nutrients. It’s high in fat and low in carbohydrates and protein.

Using the ketogenic diet, the researchers have succeeded in bringing 90 percent of patients with SRSE out of the deep coma safely while stopping status epilepticus.

Cervenka and her Johns Hopkins colleagues—with others from Mayo Clinic, Rush University Medical Center, Oregon Health & Science University and The Queen’s Medical Center—recently launched a prospective multicenter trial in which a standardized ketogenic diet protocol will be used to provide further data about its ability to treat SRSE.

She is also applying a therapy called the modified Atkins diet to patients she regularly treats at The Johns Hopkins Hospital’s Adult Epilepsy Diet Center, which she also directs. Patients learn how to track their weight, urine ketones and number of seizures, and they receive recipes and information about the diet and the food they’ll be focusing on—including butter, eggs, bacon and mayonnaise—with formal training provided by a registered dietitian. “When I came to The Johns Hopkins Hospital in 2008 to work in epilepsy,” says Cervenka, “diet therapy for adults hadn’t even been part of my neurology training.”

Cervenka is even eating a version of the modified Atkins diet herself. “I’m doing it to share the experience with my patients and help them with food choices and diet ideas.”

Approach: Cervenka implemented an adult-sized version of a special ketogenic diet that works in children.

Progress: A pilot study showed success in 90 percent of SRSE patients. A prospective multicenter trial is underway for standardizing the diet for use in treating SRSE.