Doorways to Discovery - A Changing Ecosystem for Drug Discovery

A Changing Ecosystem for Drug Discovery 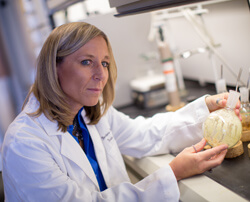 The past decade has seen a landscape change in drug discovery, as the declining number of new drug approvals has forced many pharmaceutical companies to downsize their internal research and development operations and move toward partnerships with academia.

In what she describes as “a changing ecosystem” in drug discovery, Slusher is building key partnerships with basic scientists at Johns Hopkins and the drug industry to find new drug treatments for neurological disorders—and speed their paths to market. In 2011, the BSi entered into a special collaborative, high throughput screening agreement with Tokyo-based pharmaceutical giant Eisai Co. Ltd. “With this, we put the program’s mission on an accelerated course,” says Slusher. Eisai is sharing its entire proprietary drug library with the BSi for teasing out new treatments based on novel Johns Hopkins targets.

Slusher and her team are currently pursuing six drug discovery programs with Johns Hopkins faculty in a number of therapeutic areas, including schizophrenia, peripheral neuropathy, pain, neurodegeneration, multiple sclerosis and brain cancer. They have raised funds, signed licensing agreements with drug companies and spun out a new company, Cerecor Inc. They are demonstrating that innovation, depth of knowledge, research capabilities and understanding patient needs combine to make a highly productive environment for drug discovery.

Slusher is also working outside of Johns Hopkins to bring together this growing community around academic drug discovery. “Partnerships are the future of drug discovery in every field,” she says. With colleagues from the University of North Carolina, Harvard, Vanderbilt and the University of California, San Francisco, she founded the Academic Drug Discovery Consortium (aD2c) to exchange know-how and create repositories of shared data and information. In less than two years, 110 academic centers and more than 1,000 individuals from around the world have become aD2c members.

Approach: Slusher and team are building drug discovery capabilities internal to Johns Hopkins; they also are educating and collaborating with faculty interested in drug discovery and translation.