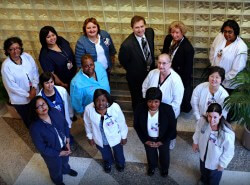 The Chesapeake Unit team transformed their geriatric floor, suffering from wear and tear, into a better environment for patients and themselves

When the John R. Burton Pavilion (then named the Johns Hopkins Geriatrics Center) first opened on the Johns Hopkins Bayview Medical Center campus in 1991, the Chesapeake Unit was bright and sparkling new, the facilities were up to date, and the peach-colored walls were incredibly en vogue. However, two decades later, the walls had gone from just peachy to downright dirty, the unit looked cluttered and outdated, and staff was generally struggling with morale.

Stacey Schaab, director of performance improvement for the Johns Hopkins Bayview Care Center, knew she had a great team on her hands. “I do safety rounds on Chesapeake every morning, and they were always eager,” she says. “They just needed a little TLC.”

The level of care at Chesapeake was never in question. For example, the 36-bed, sub-acute, short-term rehabilitation unit recently went a full eight and a half months without a central line bloodstream infection—quite an accomplishment for a unit specializing in wound care.

But when Schaab got the opportunity to partner with Robert Hody from the Johns Hopkins Center for Innovation in Quality and Patient Care for a Lean Sigma project, she knew that Chesapeake could benefit. Hody is a Lean Sigma master black belt, a rank in the widely used program that identifies and removes inefficiencies. The goal of the project for the Chesapeake Unit was to open the lines of communication among employees and to empower the frontline staff to become their own engine for improving their environment and, in turn, their spirits.

It all started with a makeover. Chesapeake worked with housekeeping, facilities and other departments across the medical center to repaint the hallways, hang new artwork and refurbish the break room. Patient rooms were gutted and redone one at a time; nurses carefully relocated each patient with all of his or her equipment and belongings, giving facilities only 48 hours to coordinate with painters, carpenters, electricians and plumbers to turn over the space.

The changes to the physical environment have made Chesapeake a more pleasant workplace for the staff. Their newfound pride in their home has influenced their day-to-day interactions with other staff members and with patients. “The physical space is a big deal, but the true growth has been in how the staff respects each other,” says Schaab. Each staff member was invited to take part in the Lean Sigma project; everyone could submit an idea, and every idea received action. After working together and seeing the aesthetic improvements on their unit, the Chesapeake staff now say they feel a sense of ownership.

“You used to hear people say things like, That’s not my patient,” says Ann Oduyingbo, patient care manager. “Now everyone comes running to answer a call light.” “We all spend a lot of time here, so if we see a cup on the floor, we pick it up instead of waiting for housekeeping,” says nurse Augusta Conteh. The staff’s newly developed “Chesapeake House Rules,” which address such things as respecting soft sounds, knocking before entering and keeping hallways clear, were peer-developed and are peer-enforced.

“The hierarchy has flattened,” says Schaab. “It’s now an even playing field, and everyone knows their opinions are welcome.”