Dome - Catching up with Landon King

Catching up with Landon King 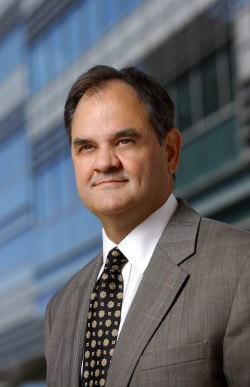 “Right now I’m spending a lot of time talking to different stakeholders across the Institution to learn their perceptions of issues and opportunities.” —Landon King

For the past 17 years, the Johns Hopkins School of Medicine has received more biomedical funding from the National Institutes of Health than any other institution in the country. In 2010, its researchers received $438.8 million—a challenging record to maintain.

Landon King is eager to improve it. He’s the new vice dean for research at Johns Hopkins Medicine, succeeding Chi Van Dang. In this role, King will lead basic and translational research at the school of medicine, as well as work to develop core resources and facilitate collaborative research. He will oversee research administration and policy coordination and help to coordinate technology transfer opportunities.

Since 2005, the 51-year-old physician has served as director of the Division of Pulmonary and Critical Care Medicine, overseeing 60 faculty members and many large research investigations, including his own NIH-sponsored work.

King came to Hopkins in 1989 as an intern in the Osler Medical Service and subsequently worked as a postdoctoral fellow with 2003 Nobel laureate Peter Agre. He became an assistant professor in 1997 and was named the David Marine Professor of Medicine and Biological Chemistry last year.

What are your priorities for this position?

I’m not coming into this with an extensive list of my own priorities. Right now I’m spending a lot of time talking to different stakeholders across the institution to learn their perceptions of issues and opportunities.

Do you envision partnerships with researchers at Suburban, Sibley and All Children’s hospitals?

There’s a lot of interest in that potential, but there isn’t a lot that is concrete about what such research opportunities will look like, in which categories they will fall, and what’s necessary to drive them forward. There are certainly process issues, like protocol review or study oversight, that emphasize the important role that institutional review boards that Dan Ford oversees will play in the process. [JHM’s review boards examine all research projects that involve human subjects to ensure they protect the rights and welfare of the participants.]

The big picture questions of how we can best engage across JHM to drive discovery, innovation and excellence in research are the subject of ongoing discussion.

What changes have you seen in the way Hopkins does research during your  22 years here?

I think there’s an overt emphasis now on identifying partners and collaborators with complementary interests within the school and across schools, such as the Bloomberg School of Public Health and Hygiene. That’s all become part of the daily conversation about how to successfully pursue research and move it forward.

Another part of the conversation is how to generate and sustain core services. There are now big slices of science that are really hard to tackle individually, not just in terms of expertise, but in terms of cost. There are certain high-end technologies, such as large-scale DNA sequencing, that no single investigator, group of investigators, or even an entire department can unilaterally generate and maintain.

You went from working in a lab to taking over the division. Is that unusual?

I don’t think it’s all that unusual. Skip Garcia, my predecessor in this position, gave me opportunities to participate in administrative and leadership activities within the division. I helped oversee parts of the educational program: I ran continuing medical education courses that were national courses, and I ran the fellowship recruitment for a number of years. So I had opportunities to get up from the bench to look at life both within and outside of the division on the way to moving into the director position.

What can you tell us about your own patients and research?

I attend in the medical intensive care unit where many patients have respiratory failure. A significant number of those patients have acute lung injury, a diffuse inflammatory process in the lungs that causes them to require mechanical ventilation in an ICU. Each year, acute lung injury affects about 200,000 people in the United States, and about 75,000 of them die.

One focus of our research is to identify specific targets for therapies that can accelerate recovery from lung injury. We found that while there’s been a lot of work to understand how the lung gets injured at the start, almost nothing had been done to understand the steps that allow an injured lung to heal. We have identified some steps we think may play a central role in mediating the transition from injury to repair.