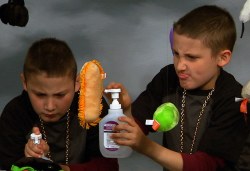 When it came to hand hygiene compliance, All Children’s Hospital seemed to be in an enviable position. Its inpatient rate was around 93 percent and its outpatient clinics were doing even better, with a near-perfect 99 percent.

But with such vulnerable patients as infants in the NICU and significant numbers of cancer, bone marrow transplant and heart transplant patients, the hospital wasn’t content with almost perfect. Instead, All Children’s targeted improved hand hygiene as a key patient safety goal and garnered several awards in the process.

The hospital’s clinical leaders created a Hand Hygiene Task Force charged with increasing inpatient compliance among staff to 96 percent or above. The 25-member group includes clinicians drawn from the Infection Prevention Committee and other relevant departments.

The effort launched in October 2010 with a new training module for clinical staff. The task force also surveyed staff and parents and learned that an improved teaching vehicle on proper hygiene techniques would be helpful.

This feedback led to the development of “Scrub A Dub Dub,” a hip-hop music video the hospital’s Creative Services Department produced to promote proper hand hygiene techniques. It stars 8-year-old twin boys, one of whom spent months in the pediatric intensive care unit in 2009 fighting a case of Guillain-Barré syndrome that left him connected to a ventilator and almost completely paralyzed.

The video was uploaded to the content stream for the GetWellNetwork, an education and entertainment system connected to patient rooms.

Another key part of patient and family education was the creation of separate handouts describing proper hand hygiene techniques. Developed in collaboration with the Family Advisory Council for the med-surg and intensive care units, the handouts include language that parents can use to remind staff members or visitors about proper hand hygiene.

Thanks to these communication efforts, the task force exceeded its benchmark goals, with inpatient compliance at 98 percent and outpatient compliance at 100 percent by summer 2011. “We improved on what was already a highly successful rate of hand hygiene compliance,” says Hella Ewing, vice president and chief nursing officer.

The Hand Hygiene initiative won the 2011 President’s Award from the Florida Hospital Association’s Society for Healthcare Public Relations and Marketing, as well as two “best in category” awards. The video earned four Telly Awards plus a People’s Choice Telly. It can be viewed at http://bit.ly/ScrubADub.