Navigating the rules for new doctors 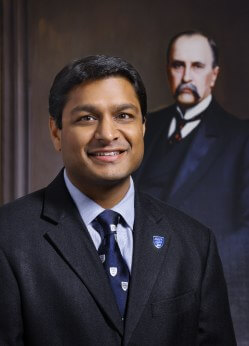 Sanjay Desai, the new director of the Osler Medical Training Program in the Department of Medicine, began his relationship with Hopkins as a 2-month-old infant treated for croup in the pediatric intensive care unit. Now the 39-year-old Hopkins-trained pulmonologist is overseeing the education of 123 internal medicine physicians in the program that’s honored as the nation’s first medical residency.

His first big challenge is dealing with the cutback in on-duty hours for interns, mandated by the Accreditation Council for Graduate Medical Education (ACGME), the organization that reviews and certifies residency programs. Prompted by concerns over fatigue and lack of supervision, the new requirements cap the maximum number of consecutive hours worked by interns (doctors in their first year of residency training). Desai talked with Dome about navigating these changes and what’s on the horizon for the program.

Q. How is the cutback from a maximum of 30 hours to 16 affecting education and scheduling for the 48 interns in your program?

A. We’ve adopted a model in which interns work a five-day cycle, staying on call overnight every fifth night, to admit patients whom they follow and are responsible for. We’re trying to increase the number of interns present during the day, so they can experience the evolution of disease and treatment for their patients with fewer instances where the care is handed off from one medical team to the next. We also want them to have as many learning opportunities as possible by participating in patient rounds and attending lectures.

Q. What are some of your concerns with the new regulations?

A. The new hour rules make it more difficult to deliver excellence in clinical training through teaching and exposure to faculty. The whole ACGME paradigm has reduced the number of consecutive hours that interns are in the hospital. This means the interns theoretically sleep more, but whatever sleep benefits they get come at the cost of increased handoffs. Interns are not physically here enough to feel ownership for their patients’ health and well-being. We feel this is one of the most important and fundamental things that has to be learned in the most formative years of a physician’s training.

Q. How does your program plan to respond to these challenges?

A. While we adapt our schedules to the new hours, we’re also studying the impact and influence of these regulations. Along with figuring out how to best deliver care within this new framework, we want to become the leader in investigating how to create the best residency program possible through effective teaching and training.

Q. And how will you do that?

A. We’re asking our residents to fill out surveys, wear watches to figure out how much they sleep and be interviewed in focus groups. Soon they’ll have the option to take neurocognitive tests, almost like video arcade games, both pre- and post-call to see if their psycho-motor skills change. These sophisticated tests can be done in very short time periods and have been used for airplane pilots and train conductors, among other professions where attention and sleep compete against one another. We’ll compare the results for first-year residents operating on a 16-hour sleep model with those of the second- and third-year residents who can use a 28-hour sleep model under the new ACGME rule.

Q. You’ve been a Hopkins resident, fellow and assistant chief of staff. In your years here, what have you enjoyed most?

A.When I walk the halls of Hopkins, I still really feel an energy that you don’t feel at other places. When you work with the interns, residents and attendings, you have this very sincere sense that they want to do something big—nothing small—they want to do something big, whether that’s in clinical medicine, research public policy or global health. That is what makes it fun for me—to work with them and realize they will literally change this world.