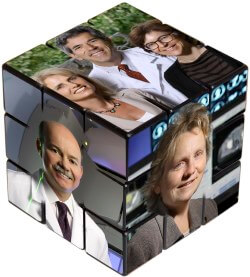 1 2 3
Theodore DeWeese and Irene Gage are arranging the pieces of Radiation Oncology’s clinical integration that will involve physicians such as Susan Stinson, Stephen Greco and Laurie Herscher.

Imagine an elderly man with prostate cancer who wants to enroll in a potentially life-saving clinical trial at The Johns Hopkins Hospital. Because he lives in Bethesda, however, he doubts that he and his wife can make the weekly drive to East Baltimore for radiation treatments. If that same trial were offered at nearby Suburban Hospital or Sibley Memorial Hospital, he would participate without hesitation.

The department of radiation oncology at Johns Hopkins Medicine is close to offering him that option as part of JHM’s initiative to integrate clinical trials and services across its expanded health care delivery system.

Theodore DeWeese, director of the department, heads a group laying the groundwork to integrate clinical operations for radiation oncology at Sibley and Suburban, both located in the Washington, D.C., metro area.

“We’re trying to blend the best of academic medicine and community medicine in a way that improves the care and process of care for the community,” says Brian Gragnolati, senior vice president for the Johns Hopkins Health System and Suburban Hospital president and CEO.

While similar integration efforts are also under way in surgery, geriatrics, primary care and perinatal, radiation oncology is the most advanced in the process. Instead of attempting to oversee separate operations at three hospitals, DeWeese says, creating one large department has the opportunity to create a “seamless” system of care for patients and academic research.

Since restructuring began earlier this year, teams on all campuses associated with radiation oncology have begun work to standardize quality assurance measures, compliance, and safety and treatment protocols. Institutional review boards, charged with examining the safety of research projects that involve human subjects, are in place. Hopkins is purchasing new treatment equipment for the community hospitals. Three physicians from Suburban Hospital have joined the radiation oncology department as full-time attending physicians.

“These are radiation oncologists of high caliber with great reputations in their own communities,” DeWeese says. “This arrangement provides a different kind of stability to what they do and allows us to make sure we’re consistent in how we monitor patient safety and measure physician performance across the health system. It also allows us to gain an understanding of the kind of patients we’re serving.”

The first stage of integration—agreeing to acquire new information technology, medical equipment and treatment planning systems—is complete. All three hospitals will share the same system to record, verify and evaluate patient treatment plans. They will also use the same type of linear accelerator, a device that delivers high-energy precision X-rays to target tumors.

Irene Gage understands the cultures of both community and teaching hospitals. Now medical director of oncology for Hopkins’ National Capital Region (NCR), the area served by Sibley and Suburban, she was a full-time faculty member at Johns Hopkins School of Medicine before becoming chairman of radiation oncology at Sibley. Her job ranges from serving on various NCR planning committees to visiting individual therapists to learn more about Hopkins safety programs. She has also arranged meetings between Hopkins experts and groups of community-based physicians, physicists and administrators to exchange ideas regarding new models of safety and risk analysis.

“I’m wherever we need boots on the ground,” Gage says, adding that she believes radiation oncologists will find it easier to become part of an academic department than some privately practicing physicians might.

“Radiation oncologists almost always have some relationship with a hospital because few of them have the millions of dollars required to support the technical side of their discipline,” she points out. “For instance, most of these physicians came out of academic centers. They understand the value of that model and acknowledge that it’s going to be increasingly more difficult to be a stand-alone radiation oncologist in a changing health care environment.”

In their positions as clinical associates, the doctors from Suburban Hospital can help develop research protocols, participate in Hopkins’ educational conferences and provide instruction to resident physicians in addition to treating patients.

“Although the care at Suburban is comparable to any you’ll find at major university centers, our community [of patients] has a certain comfort level knowing the relationship between Suburban and Johns Hopkins is very open and free-flowing in terms of information and treatment,” he says. “What they may not realize yet is that the true benefit will be the translational research and the trials that can be extended to the community.”

He mentions a recent visit from Richard Zellars, an associate professor in Radiation Oncology, who explained a clinical trial that decreases the duration of a standard breast cancer therapy—chemotherapy followed by radiation after lumpectomy—from five to six months to less than two months.

“There’s a lot of enthusiasm about opening those trials and introducing those protocols at Suburban,” Gage says. “Because of the volume of breast cancer seen in their program, they have many eligible patients.”

Is there a downside to integration?

“The anxiety of change and not knowing exactly how it’s going to be,” Greco says. “But we have faith that it’s going to be good for us as well as the community. The biggest change we hope to see is being able to offer novel or experimental treatments that are available right now to those patients who desire them.”

Expanding clinical trials to include patients at Sibley and Suburban will accelerate research, says Hopkins prostate cancer specialist Michael Carducci. As director of oncology research for Hopkins’ National Capital Region, he is also working to increase Hopkins’ collaborations with the National Cancer Institute. Meanwhile Suburban will continue to serve as a teaching site for NCI radiation oncology residents.

It’s a reminder of the intricate challenges of integrating Hopkins’ standards into its member organizations.

“The complexity of what we’re doing here is pretty high,” Gragnolati says. “It requires working hard to understand different perspectives while always keeping focused on the ultimate goal.”