In just nine months, a new medical school with a Hopkins framework opens its doors in Malaysia. 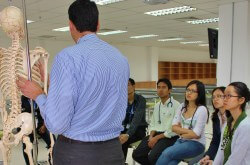 As the new school year gets under way, the first students of Perdana University Graduate School of Medicine are learning their profession in the traditions of The Johns Hopkins University and the American system of medical education. For a country used to the British method of undergraduate medical training, this new frontier is exciting—and a bit confusing.

It’s also proved challenging for medical school administrators trying to explain the benefits of this educational option, as well as Hopkins’ innovative curriculum, in a short period of time.

Enter Facebook. Over the past six months, social networking on Perdana medical school’s Facebook page has proved invaluable to recruiting, according to admissions director David Trabilsy. Site administrator Amy Steinberg has documented the physical development of Perdana’s interim campus and also posted daily updates about new faculty and other news.

Perhaps most important, Facebook has provided friendly, clear responses to the questions of Malaysian applicants like Lai Yaun Xin who can be culturally uncomfortable with face-to-face informational sessions.

“Your clarification helps a lot,” Xin posted after Steinberg explained the difference between the British medical degree and Perdana’s new M.D. “I will go for it for sure no matter what is the answer.”

Xin, a 2009 graduate of University Putra Malaysia (and Facebook fan of singer Michael Buble) is now officially a member of the Class of 2015. She joins 24 other trailblazing medical students, three-quarters of whom are women, who have begun their studies in the school’s temporary headquarters near Kuala Lumpur, Malaysia. Most of their teachers are Hopkins faculty members on leave from their duties in Baltimore.

This milestone stands as a tribute to the collaborative spirit of the Hopkins and Malaysian communities as well to an academic version of warp speed. Just a year ago, Charlie Wiener, the new school’s dean and CEO, was teaching, directing the Osler Medical Training Program and reviewing first-year results of the Genes to Society curriculum he helped to shape.

Then Johns Hopkins Medicine signed its historic agreement to help create Malaysia’s first four-year graduate medical program, as well as to design Perdana University Hospital, a 600-bed facility, and a research institute. The three facilities, scheduled to be completed in 2014, will occupy a 130-acre site, roughly the size of Johns Hopkins Bayview Medical Center’s campus.

When tapped as dean, Wiener agreed to find students, faculty and a temporary school location equipped with high-tech teaching resources in time for the 2011–2012 academic year.

By early summer workmen had transformed more than 100,000 square feet of convention building space near Kuala Lumpur into 21st century classrooms and labs. Eminent professors from Hopkins and Malaysia had signed on to teach. Recruiting sessions at local universities, as well as social networking efforts, produced 70 applications by July 31. Students were accepted in August.

“The fact that we were ready to have a class to teach in only nine months is really mind-boggling,” Wiener says. “Just accepting the U.S. system of education represents a huge culture change here.”

Until now, Malaysia has used only the British system of medical education. It calls for students to begin their five-year training as undergraduates, usually at the age of 18 or 19, instead of waiting until they obtain the bachelor’s degree that is required in the United States. With more education and maturity, American reasoning goes, college graduates are better prepared to enter rigorous training programs.

The new school follows Hopkins’ Genes to Society curriculum, a course of study that aims to train doctors to deliver individualized medicine. Using a patient-centered approach and innovative teaching methods, Genes to Society teaches students to understand all the levels of the human being: from the genes, molecules, cells and organs of the patient, to the familial, community, societal and environmental components that also affect health.

Acceptance standards are also rigorous. Members of the Class of 2015 maintained an undergraduate grade point average of at least 3.5—the minimum required of all applicants—and excelled during individual interviews. The class contains one international student who received an undergraduate degree at The Johns Hopkins University. The medical degree from the new school will read “Perdana University in collaboration with Johns Hopkins.”

“The fact that we have 25 in the first class is terrific,” says David Nichols, vice dean for education at JHM. “We’re right in the sweet spot with the size of the faculty and lots of small groups and one-on-one mentorship. I think the students will have a terrific experience.”

Nichols is helping to coordinate Perdana’s development in his role as director of the Johns Hopkins Dr. Mohan Swami Institute for International Medical Education, a new institute dedicated to improving patient care by improving medical education. In addition to offering programs to advance specific skills such as surgical training, the institute will use the Genes to Society curriculum to spread Hopkins’ educational mission throughout the world.

“We’ve gotten a class of the best students in Malaysia who are willing to try something new,” Nichols says. “They know they are pioneers and that we are, too. Now we’re going into uncharted territory together to build something that the country needs: doctors who are more mature and better trained.”