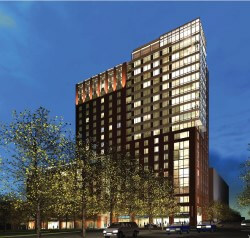 When shovels clunked into the hard ground of 929 North Wolfe Street recently, it signified more than just a groundbreaking for a graduate-student housing tower. It also reaffirmed a promise that Hopkins made more than seven years ago to support the redevelopment of a community that has housed its medical campus since 1889.

Scheduled to open in the summer of 2012, the $60.7 million tower will offer 321 one- and two-bedroom units with premium amenities, like wood flooring, granite countertops and a fitness center. At 20 stories tall, it will house medical students and graduate students from the three campus schools—Medicine, Nursing and Public health—as well as interns, residents and fellows.

“These new buildings,” said Hopkins Medicine’s CEO and Dean Edward Miller to an audience of more than 100 people, including elected government officials, “are symbolic—and concrete—evidence of our enduring commitment to community and our city. When I see new structures going up, I see progress and growth. I see hope and opportunities.”

The tower is another piece in a plan to revitalize 88 acres in an area of East Baltimore adjacent to the campus. The project—which in addition to Hopkins is supported by the community, Baltimore City, the East Baltimore Development Corporation and the Annie E. Casey Foundation—encompasses 1.2 million square feet of new biotechnology space and up to 500,000 square feet of commercial space, which will employ up to 8,000 people.

The project will provide for up to 2,100 units of mixed-income housing, a new pre-K-through-8th-grade public contract school, public parks and open space, and a regional rail station. When completed, $1.8 billion will have been privately invested in the community—$500 million of which has been invested so far.

East Baltimore Development Incorporated (EBDI) is the driving force behind the student-housing project, which is being funded by a private developer. No Hopkins money is involved.

For David Nichols, vice dean for education and a member of the EBDI board, the student-housing project represents a mutually beneficial strategy for the institution and the community. From the medical school’s perspective, it answers the problem of what is clearly antiquated student housing (Reed Hall) and replaces it with a modern, attractive, multifunctional facility. From the community’s perspective, the project is another step in making the historic neighborhood a vibrant place to live, with multi-income housing, a mix of retail business and a center of professional and academic culture.

“To make this work, you need people to drive the economic activity,” Nichols says, “whether its residents coming back to live or students living near where they train.”

Nichols points out that officials from the schools and from EBDI met with the student and resident groups to discuss the project. The response, he adds, has been quite favorable. “There’s just no comparison to the housing we have now and what this project will offer,” Nichols says.