There’s a new resource to get caregivers through the trauma of medical errors. 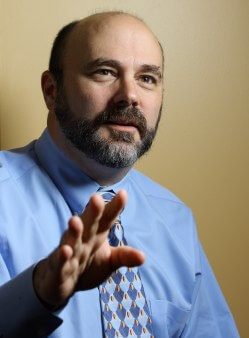 As a risk manager for the The Johns Hopkins Hospital, Jeff Natterman frequently must get to the bottom of tragic events that involve medical errors. But in the course of that work, he often plays the role of therapist to the distraught caregivers that he interviews about what happened.

“People have sat in my office and wept,” he says. “Others have not wanted to talk for weeks because they were contemplating getting out of the profession completely.”

Natterman acknowledges that  knowing what to say in these cases—such as when convincing caregivers that the hospital isn’t “out to get them”—is something that he and fellow risk  managers have had to learn on the  job. He also realizes that, while these “second victims” of medical errors need support beyond what he alone  can offer, the institution has no coordinated system to provide it.

In recent months, however, a group has formed at Hopkins Medicine to  address this need. Called the Second Victim Committee, its goal is to develop a plan to more effectively assist caregivers who are traumatized as the result of unexpected patient death or injury. The group wants not only to raise awareness within Hopkins of these caregivers’ needs, but to identify and develop resources for coping with these events. One of the group’s first steps, which is still taking shape, is training a team of faculty and staff who respond to serious events and help colleagues to heal.

The need is acute, says Albert Wu, a Hopkins internist who delivered a talk on second victims at this summer’s Johns Hopkins Medicine Patient Safety Summit. These caregivers may worry that they have lost colleagues’ trust. Images from the event can replay in their minds for months. They may have trouble focusing on their clinical duties—increasing the risk of future errors—or experience symptoms of post-traumatic stress disorder, such as hyperactivity, nightmares and headaches.

Compounding this stress, the culture of medicine treats errors as deviant acts, Wu notes. “In health care, we don’t always handle people sensitively or kindly who we perceive as transgressors,” he says. “Caregivers internalize those reactions and beat themselves up” if they are involved in errors.

The idea for the committee evolved from discussions with pediatric nurses who still experience pain over the death of 2-year-old Josie King at Hopkins Hospital in 2001 and the publicity that followed it. Natterman, Patient Safety Director Lori Paine and Director of Pediatric Nursing Shelley Baranowski, who all took part in these talks, recognized the need for a better system to support second victims.

A survey of summit participants hinted at the extent of the need. Of 140 respondents, 60 percent recalled an event in which they were second victims. Among that group, 65 percent reported that, as a result of the incident, they experienced problems, such as anxiety, depression or concern about their ability to perform their jobs.

And while roughly half of them received some support—from colleagues, friends or supervisors—44 percent reported getting none at all.

Baranowski, a Second Victim Committee member, believes that a coordinated effort is needed.

At present, when a pediatric nurse has been involved in a serious error, the nurse manager often seeks help from palliative care experts or chaplains, if available, or the Faculty and Staff Assistance Program. But while they make use of the resources at hand, more is needed, Baranowski says. She’s excited about the committee’s concept of trained peer supporters who serve as “first responders to second victims.”

Providing support should happen “as part of our built-in processes, but that’s not the way it happens today,” she says. “Right now, it depends on who thinks about it.”