To overcome tough financial times, the institution turns to sources of additional support. 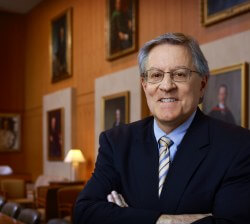 It’s clear to Rich Grossi that “the economy is no longer forgiving. There isn’t a business in which you can expect to thrive without being very good.”

When Rich Grossi welcomes Johns Hopkins Medicine senior financial managers to the school of medicine board room each week, he shares new ideas as well as concerns. At a recent meeting, for instance, the chief financial officer for Johns Hopkins Medicine passed out copies of How the Mighty Fall, a book describing why a company should never regard its history of success as an entitlement.

Consider it an appropriate mindset for navigating the troubled waters of the health care world in 2010. Faced with significant financial challenges, all of JHM’s entities must either increase revenues or cut costs over the next few years, Grossi says. The institution inhabits a very different universe from the one he entered in 1978 as the school of medicine’s faculty practice plan director. In those days, he recalls, no matter how inefficient you were, you could still prosper if you got your bills out the door.

“It was a time when basically you couldn’t lose money in medicine,” he says. “But the economy is no longer forgiving. There isn’t a business in which you can expect to thrive without being very good.”

As times have changed, he notes, Hopkins has worked not only to improve its health care delivery but also to cultivate overseas partnerships and other revenue sources that advance the institution’s mission while also helping to fund it.

“We pretty much start almost every budget cycle understanding that we have an issue to resolve,” he says. “We take the overall target for Johns Hopkins Medicine and convert that into entity-specific targets and then into departmentally specific targets, if that’s appropriate. We effectively ask the decentralized organization that is Johns Hopkins to give us a plan that gets us to where we need to go collectively.”

So far during the recession, he points out, the organization has avoided major layoffs. He says the school of medicine is in better financial shape than some peer institutions that relied on endowments to supply as much as 30 percent of their annual budgets. When the value of those investments plummeted in 2008, the schools lost 15 percent to 20 percent of their annual income.

“Our medical school’s endowment supports about 3 percent of our annual budget, so it’s a very small amount,” he says. “We did feel an impact, but most of our departments were able to address that. Future budget projections are challenging, but it’s something that we have time to respond to.”

One potential new source of funding is a project to help build an academic medical center in Malaysia. “It’s a big transaction that’s going to benefit the people of Malaysia as well as the medical school by providing new work for the faculty and helping to finance some other academic initiatives.”

Other international partnerships, such as contracts to manage three hospitals in the United Arab Emirates, also add to margins, as do ventures close to home, such as the U.S. Family Health Plan, the health care program Hopkins manages for the military.

“That’s one of the most profitable pieces of business we have today,” Grossi says. “The plans for BRAC (base realignment and closure) give us an opportunity to build on it.”

Another growth area is Johns Hopkins Medicine’s on-site employee health and wellness centers, clinics staffed by nurse practitioners at workplaces with at least 300 employees. Developed by Ed Bernacki, director of Hopkins’ Division of Occupational Medicine, the program has launched 50 clinics in 18 states.

“Although it’s important to keep up a steady flow of opportunities, it’s also important to remember that we’re not doing this just because we want to get into different businesses. Whether we’re expanding a clinical delivery system in Maryland or completing a transaction overseas, the intent is always to strengthen the organization and support its mission.”

The effects of health care reform

As new federal legislation begins to transform health care, it brings a cloud of uncertainties. Although he says the institution has become used to managing the ebb and flow of federal dollars in research grants, Grossi worries about how health care reform will fundamentally change the industry’s financing model.

“People can’t even predict now what the impact will be,” he says. “It isn’t just whether Washington is spending the same amount of money overall, but whether it is causing major disruptions within the health care industry by moving components of funding from one place to another.”

The Hopkins model is built on being able to take our current revenue streams, Grossi points out, and make them work for what the institution wants to achieve. “Anytime you disrupt that, it can have a major impact on the bottom line. That may affect rating agencies that look at our bonds and how potential faculty and staff members and students view us as a place to come. All of those things are critically important to continuing our mission.”

At his weekly meeting, Grossi emphasizes the importance of creating a common view of economics and finance.

“I don’t spend much time talking in details about numbers,” he says. “I talk about what we’re trying to achieve, why we’re doing what we’re doing, and how everyone can participate in making things better.”

Similarly, he encourages each employee to contribute by improving his or her performance.

“It’s not so much a budget cutback that can ultimately take away jobs, because we’re going to do everything we can to avoid that,” he says. “What’s more serious is not responding to the changes that the industry is demanding. If we aren’t kind to patients, if we don’t think about their satisfaction, if we don’t make this the most attractive place to come to, that will have greater financial implications.

“When a patient arrives and is greeted by a happy person who is engaged in making the experience positive, that’s a financial strategy as much as anything else. And that is something we can control.”