Nurse managers take on the mantle of easing nursing staffs into a transformed workplace. 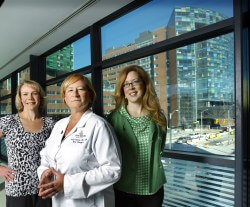 1 2 3
Nancy Praglowski, Kelly Caslin and Roberta Anderson (l to r) are among the nurse leaders preparing staffs for changes in their work environments.

Joan Diamond knows what it’s like to lose the security of a familiar workplace. When she was a staff nurse at another hospital, her unit moved to gleaming new quarters. Instead of elation, though, Diamond felt only doubt. Her comfortable routine had come apart and she had no one to turn to for reassurance.

“I remember walking out of a patient’s room on the very first day and looking up and down the hall,” says Diamond, now the prenatal nurse manager at The Johns Hopkins Hospital. “All of a sudden, I got a pit in my stomach, and I thought, This doesn’t feel good.”

Throughout the unit, many staff shared her anxiety, she says. “It didn’t matter how beautiful the new place was.”

As opening day approaches for the Sheikh Zayed Tower and The Charlotte R. Bloomberg Children’s Center, Diamond holds up that disconcerting experience as an object lesson on what not to do. “We were told where things were and how to use new equipment, but no one talked to us about how we might feel about leaving our unit or how to handle the stages of change.”

Anticipating the monumental shifts in store for the hospital’s 2,876 nurses, Diamond and a group of fellow nurse managers have made staff support a high priority as they ready for the extremely complex transition. “It’s not just the physical building that will change,” she says. “Staff assignments and processes will change along with the equipment and furniture.”

Diamond knows that far more than the staff’s emotional state is at stake. Patient care and safety depend a great deal on the close ties forged among health care team members, often over the span of many years. When the new clinical buildings open, scores of those alliances will be ruptured, whether nurses serve on units that are poised to expand, shrink, close or regroup. About 300 nursing staff members will find themselves on new teams, building trust and mutual support from scratch. Approximately 300 new nurses will also be hired to meet the new clinical campus’ staffing needs.

With their support through the transition, nurse managers trust that the quality of patient care will not falter as nursing staffs adjust as seamlessly as possible to their new work life. Diamond appreciates the benefits of clinical simulations, floor-plan reviews and other preparatory exercises. But she also knows that such exercises cannot fully prepare staff for the first day in the new building, “when a real patient with real needs is in labor and ready to deliver her baby.” That’s why, she says, “we have to have the staff as ready as possible, emotionally and clinically, for that first patient.”

A map for the future

To guide their staffs through the topsy-turvy emotional terrain ahead, nursing leadership turned to a model called Managing Organizational Transition. The training program, developed by William Bridges & Associates, looks at change as a springboard for personal growth rather than as an insurmountable barrier. The program is designed to be flexible, allowing for the kinds of issues and pace of change that are particular to each unit.

At a retreat in September, nurse managers across Hopkins Hospital were introduced to the program’s basic principles and urged to embrace them throughout the transition. “Begin to live this model,” Gail Biba, nurse manager on the Meyer 7 neurocritical care unit, advised retreat participants. Over the next two years, become more competent in listening and supporting staff, she told her audience. “It’s not about supplies; it’s about the people. It’s not about leadership; it’s about your influence.”

Perhaps the most important elements of a successful transition are communication and repetition of information to ensure that all messages are heard. “Keeping the staff informed is extremely important,” especially because plans continue to change, says Kelly Caslin, nurse manager on Osler 4. “And if you don’t know the answer to a question, you tell them you don’t know.”

Often, the most basic facts can reduce concerns in the first, uncertain stages of this kind of shift. That’s why Diamond launched the transition process early on her unit, which will relocate to the adult tower.  “I’ve been talking about the new building to my staff for about a year now. Since last year in June, they’ve been getting a monthly update. I show slides and ask for their input, and plans have been on display in the unit for well over a year.”

Shortly after the retreat, Biba took out a large, laminated diagram that depicts the Meyer 7 unit in relation to its future location on the third floor of the critical care tower to help staff members get their bearings. For example, when they see the route that will take them from their new location to their administrative departments, they realize, “We’re not going over to some distant country,” Biba says.

Caslin, too, has begun conversations with staff, but of a different nature since her telemetry unit will not be moving to the new adult tower. “When I sit down with my people and talk about what concerns them most, patient safety is at the forefront,” she says. “We’ll have to go a lot further to transport patients to the MICU and CCU in the new adult tower. How will we do that and assure that it’s done safely?”

Caslin and her colleagues have also honed their observation skills so they can recognize and handle staff members’ stress, anxiety, resentment and other signs of unrest stemming from change. “Fear, anxiety and uncertainty: Those are big red flags,” she says. “As a manager, you have to look at where your people are in the transition process.”

Nurse managers are also equipped to complete a “loss analysis” to understand what each staff member stands to lose as a result of the transition, ranging from relationships and status to a sense of identity and confidence. With such insights, the managers will be better prepared to counsel nurses bound for new work settings and those who will be displaced and have to apply for new jobs according to a staffing preference plan that’s still in development.

To move forward, the past must be honored, nurse managers agree. For that reason, the pediatric psychiatry unit’s acting nurse manager, Nancy Praglowski, welcomed staff nurse Bijal McGovern’s offer to compile photos and memories for a yearbook to be printed by an online publisher. The volume will serve as a permanent record of the unit’s history long after it relocates from the third floor of the Children’s Center to the 12th floor of the children’s tower and expands from 12 to 20 beds.

“The separation process is an important part of treatment. That’s what we talk about with our patients. It’s also important for us,” says Mike Bisker, a nurse on the pediatric psychiatry unit for six years.

Bryan Barshick, assistant director of nursing in Surgery, first questioned the training program’s emphasis on loss and “how to grieve.” That, he says, “was the thing that was most difficult for me, not necessarily because I’m a guy, but as a human, why are we applying the idea of grief to the process of operational change?” But familiarity with the program has boosted Barshick’s enthusiasm. “As I am getting more engaged with the model I am finding more use for it,” he says.

Encouraged by the energetic response to the program so far, Gregory Finnegan, director of organization development and training, will bring it to all management staff involved in the move at workshops planned for December and January.

Meanwhile, nearly two dozen nurse leaders, including Diamond, Caslin, Biba and Barshick, serve on the transition monitoring team, a clearinghouse for all nurse managers. Using the tools outlined in the Managing Organizational Transition program, every manager must also be able to anticipate potential emotional roadblocks on their units and have a “proactive plan in place,” Caslin says.

That said, the program’s success hinges on whether nurse managers actually use the tools, Diamond says. “Some units will use it much more than others.”