Eyes on Hopkins—240 of them

Aided by technology, a growing fleet of cameras probe the East Baltimore campus for suspicious activity. 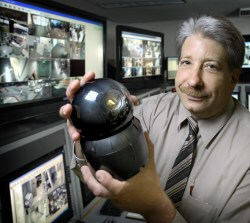 Ken Nyczaj holds a pan-tilt-zoom camera, the type that serves as the eyes for Corporate Security around campus.

One weekday morning in August, a disheveled man wanders into an alley behind the Johns Hopkins Federal Credit Union building on Monument Street. Clearly intoxicated, he plops his backpack on the ground and leans against a wall—posing a potential threat to Hopkins employees walking down a nearby street.

Hopkins’ Corporate Security officers don’t see him from their street-corner stations, but they soon know that he’s there. One of the campus’ growing number of security cameras has been watching the alley and, using sophisticated software, detects the loiterer. This recognition prompts an alert to pop up on a screen in the campus’ communications center, and a nearby officer is dispatched to escort the man away.

A prime goal of the camera network is to make the campus unwelcome territory to anyone who considers breaking the law. Already, Corporate Security says that it is seeing less nighttime foot traffic on campus, particularly on its fringes. “The cameras are very visible,” Koffenberger says. “So people who walk by, especially the bad guys, realize that the cameras are there.”

There are now more than 240 cameras covering a 16 square-block area that extends just beyond the campus’ borders.

A few years ago, the campus had roughly 18 cameras trained on its sidewalks and streets.

“They were just scattered,” recalls Ken Nyczaj, security communications systems manager, who joined Hopkins in 2007. “We had a lot of gaps in a lot of areas.”

The software package, which is also used on Hopkins’ Homewood campus, helps to manage the near-impossible task of keeping eyeballs on all of the action tracked by cameras. Cameras can be programmed to alert Corporate Security to a range of potentially troublesome situations, such as loitering, items left unattended on a curb, or crowd-forming. Because such patterns may represent normal, legitimate behavior in the middle of the day—for instance, a FedEx worker temporarily setting a box down on a curb—the sensitivity of the system can be adjusted depending on the time and camera location.

Roughly three-quarters of Hopkins’ cameras—those with the analytic software—are fixed in a single direction. Often, a cluster of fixed cameras, pointed in different directions, is accompanied by another “pan-tilt-zoom” camera that Corporate Security can remotely control to follow the action or get a closer look.

While the cameras can deter crime, they have also assisted in investigations. In early 2009, a Hopkins employee was assaulted by a man with a razor near Madison Street and Rutland Avenue.

The attacker, whose deeds were captured on camera, had been recorded not only as he walked the street before the attack, but as he made an ATM withdrawal and threw his receipt on the ground. Security officers quickly recovered the receipt and used it to identify the perpetrator. He was recently convicted and sentenced.

In another incident, a stray bullet hit a Kennedy Krieger Institute employee crossing Madison Street, causing minor injury. The gunman had left the scene. However, a camera captured the license plate of the car carrying the gunman, who was later identified and arrested.

City law enforcers also have seen the potential benefit of Hopkins’ camera network. An agreement implemented this summer allows Baltimore’s CitiWatch program to tap into the medical campus’ cameras, when needed, either to assist Hopkins investigations or to keep tabs on its own. From a command center, CitiWatch already follows 500 pan-tilt-zoom cameras—with the familiar blue lights—in high-crime areas.

Stefan Waters, director of technology operations for CitiWatch, says that his specialists are often retired or light-duty law enforcement officers who can put a well-trained pair of eyes on the scenes they remotely observe.

“A lot of them come from certain police districts, so they are intimate with the areas that they cover,” Waters says.