Dome - It’s all about relationships

It’s all about relationships 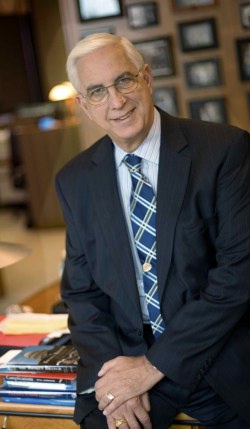 The one aspect of my job as dean/CEO that I never thought would be interesting—or, for that matter, that I would be any good at—was fundraising. You think of fundraising as going up to people, sticking out your hand and asking for a $100 million. It’s not that way at all. Fortunately for me, early on in this job, Morris Offit (former chair of the Johns Hopkins University Board of Trustees) gave me one the best pieces of advice I’ve ever received: Fundraising is all about building relationships.

More often than not, setting the stage for these relationships begins with the faculty. They are the ones who’ve either treated patients with the means to give, or they’re involved in promising research that donors are interested in supporting. People ask me how many fundraisers I have, and I always answer, 2,400. They’re called faculty.

An important element to fundraising to keep in mind is that people who give do so because they want to make a difference in other people’s lives. They do it so that fundamental discoveries can be made. They know that investing in Hopkins will make that happen. This is especially true with this generation of donors who want to support people and their projects, who want to be involved in their gift and who want to be kept informed about the progress made from their contribution—they are willing to give more when they see progress.

There are many examples I can cite to illustrate how all of this ties together. I’ll use the one that resulted in support for the Johns Hopkins Brain Science Institute.

I guess it was about six years ago that I was invited to a picnic in Washington, D.C., one Sunday in October to meet a person who was interested in making a gift. The contact was arranged by a faculty member. I sat down with the person, who came straight to the point: What were my needs? So I said that I had this new hospital that I’m building and I’m looking for money to help build it. Without hesitation, he said he wasn’t interested in bricks and mortars.

He asked me to tell him my next priority. I said that if I was looking at an area that needed funding, the brain sciences would be it.

The following Wednesday, this person—who wants anonymity—called me and said he had been thinking about my ideas and asked if $10 million could get me started in supporting brain sciences. I said, yes.

I got a group of people together that included Janice Clements, Jack Griffin, Rick Huganir and told them that we had $10 million and to start thinking how that money might be used to advance brain science. This gave rise to the BSI.

They recruited faculty, found space and started pulling in grants. About 13 months after that meeting, they had spent close to $8 million and they put together a progress report, which I sent to the donor. He said he was blown away by how much we had accomplished in such a relatively short period of time. He then asked me if I would like another $10 million.

So the BSI kept working. Later, Janice, Jack, Rick, Jeff Rothstein and I visited the donor and his wife for lunch. He wanted to know about the progress and where we thought we were headed. We presented him with a report and a proposal that showed what we could do if we had another $80 million. He funded it. So what started being a $10 million gift ended up being $100 million to support brain science research. It also gave rise to a very close and warm relationship with the donor, who is still actively involved in what we’re doing.

I’ve never asked anyone for a penny. I simply tell donors what my needs are for the institution, what opportunities exist for them to make a difference. In 15 years, Johns Hopkins Medicine has raised $3.5 billion. That’s a lot of money and, on a personal level, a lot of wonderful relationships with donors.