Dome - Before the curtain rises

Before the curtain rises 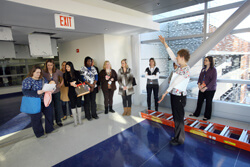 1 2 3 4 5
After a pre-skit briefing by nurse managers, it’s show time for the pediatric PACU team.

A health care facility that’s the scope of the Sheikh Zayed Tower and The Charlotte R. Bloomberg Children’s Center doesn’t open with a mere flip of a switch. It takes countless hours of preparation by dedicated staff who will deliver top-notch patient- and family-centered care in the new clinical buildings. This article is the first of three in a series that will capture a momentous chapter in the history of The Johns Hopkins Hospital, from final preparations for opening day to a look back at how the hospital fared as staff and patients moved into the state-of-the-art patient care towers.

Seated in the lounge of The Charlotte R. Bloomberg Children’s Center’s pediatric procedure area, Marla Dubyak clutches a baby doll and responds to questions from Lauren Grabau: “When did she last eat? Has she had anything to drink? Any fever or cold symptoms?”

Playing a nervous mother and a triage nurse, the PACU co-workers carry on a scripted conversation while 20 colleagues observe and take notes. Grabau’s questions may appear routine in this simulated workflow exercise, but her role is not. When the new pediatric preop and recovery unit opens in April, patient volume will soar, swelling workloads for nurses and support staff. Enter the triage nurse, a new role for the unit designed to foster timely patient throughput.

“The triage person can screen out sick patients ahead of time before they’re handed off to the preop nurse,” says Lisa Shoemaker, a nurse leader on the pediatric PACU. “We’d want to create the position for the preop process to see whether it will streamline things.”

The scenario unfolding in the PACU is one of hundreds taking place across The Johns Hopkins Hospital in preparation for life in the Bloomberg Children’s Center and the Sheikh Zayed Tower. At every level of care, clinicians and support staff are taking the stage in unit-based “day in the life” patient-care simulations, interdepartmental “dress rehearsals” and mock patient moves. All are designed to mimic the actual process of care in a multitude of settings, giving participants hands-on introductions to new workflow patterns, process Practicing procedures and techniques on mannequins in a simulation lab has become standard for students and clinicians at Hopkins Hospital and other institutions. Still, simulation has seldom been used to prepare for a large-scale transition to a new medical facility.

“We’ve never done anything like this on this magnitude,” says Robin Hunt, new clinical buildings planning and activation manager. Hunt along with Nancy Cushman and Katie Outten, both from operations integration, are orchestrating two hospital-wide dress rehearsals to test and fine-tune codes, patient handoffs and other processes before the new clinical buildings open on May 1. “We’re relying on the expertise of frontline caregivers to identify what it is that needs to be tested and who needs to be involved, down to the detail of how many staff members, the type of equipment and supplies that are needed and how to schedule it all.”

Most of the simulations under way in the new patient towers are based on the model of “experiential learning,” a method that pairs scripted “real-life” scenarios followed by discussions led by trained personnel. A proven bridge between classroom learning and reality, experiential learning also is a way of testing ideas “that we think are going to work on paper,” says Julianne Perretta, an educator in the Johns Hopkins Medicine Simulation Center who is helping to develop and set goals for a variety of practice runs in the new buildings.

Unlike the use of simulation for educating nursing and medical students, the scenarios taking place across the historic and new buildings have a different purpose, Perretta says. “The actual process of patient care, whether placing an IV or giving medications, is changing very little.” Not so for “all of the things leading up to the interaction with the patient,” Perretta says. From mundane concerns such as where to park the car or store lunch, to safety priorities such as lifting patients and medication sign-off, these are the details addressed by the day-in-the-life simulations.

If the scenarios uncover workflow and process flaws and result in more prep work for administrators and managers, then Perretta considers them a success. “We can’t afford to get this wrong once the new buildings open,” she says. “We want to solve most if not all of the problems before we move, and they’re often the things that we can’t predict.”

As opening day draws near, simulations will become more lifelike and intense, Perretta says. To ready for the two March dress rehearsals, she is working with several departments on “high-fidelity” scenarios in which every second matters with regard to a patient’s welfare. If a team is simulating a code, “They must behave as if the patient is really dying,” she says. “That helps us assess the environment and processes more realistically.”

Dress rehearsal participants won’t have a script, Hunt says. “We don’t want to give them the details of every single scenario.” For example, if rehearsal team members know ahead of time that their scenario revolves around a patient who codes, their response might be too polished to reveal possible design flaws to observers. “We will debrief to understand what went well and what needs to be revised prior to operating in the building,” she says.

Hunt is also managing two mock patient moves—one that happened in February and another scheduled for March. Each was planned to run on a schedule identical to the two-day timeframe for the actual patient move, which will take place April 29 and 30.

Because the dress rehearsals center on process design, relatively few caregivers and staff will have a chance to participate, leading several departments to seek more opportunities to work through new protocols and workflows. “I’ve gotten requests to run some additional simulations” to prepare for any number of typical, clinical scenarios, Perretta says. “For instance, if the Lifeline team is transporting a patient from the new ICU, and the patient has sudden medical problems, they might not know where they can find a clinical location where they can stabilize the patient or call and ask for more help.” Practicing transport throughout the sprawling new buildings with mannequins in stretchers will make for better patient safety on opening day, Perretta says.

In January, well before the simulations reach a life-or-death level of intensity, the pediatric PACU nurses took advantage of training time in their new workplace to rehearse for their day-in-the-life scenario. “Practice makes permanent,” says nurse educator Rebecca Putman, echoing the motto of simulation experts such as Perretta.

Putman and other nurse leaders wrote the seven-scene skit to depict the process of caring for an infant scheduled for a left inguinal hernia repair. As mother and child made their way from the parking garage to the pediatric procedure area to recovery, each encounter with the triage nurse, preop nurse, child life specialist, surgeon, anesthesiologist, clinical customer care coordinator and others demonstrated the complex choreography of normal clinical operations. Afterward, PACU staff members shared observations and pointed to potential workflow glitches that needed further attention.

No amount of preparation for such a monumental transition is too much—even if it means preparing for a day-in-the-life simulation, Putman says. “As the unit educator, I feel very responsible. I don’t want my nurses to be asked to do something when they aren’t familiar with the location of equipment or supplies and then get frustrated. All of the change and movement have already built up a level of anxiety. We wanted the skit to be a way to introduce things in a peaceful, entertaining and fun way and to carry that attitude to the day-in-the-life simulations.”