Dome - Improving the transitions of care

Improving the transitions of care 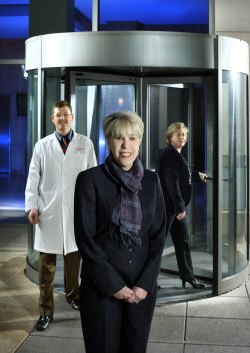 Imagining a patient at risk for readmission to the hospital, Daniel Brotman describes someone with chronic heart failure who lives alone and doesn’t understand how to control his diet to prevent a dangerous build-up of fluid.

“Sometimes chronic heart failure patients may know to limit their fluid intake, but not understand that soup counts as fluid. They may not realize that sodium is more than what they put on their food with the salt shaker,” says Brotman, who directs Hopkins’ hospitalist program. “They also may not understand that we’d rather try to intervene in the outpatient setting than have them come to the emergency room for readmission.”

Making sure that patients grasp the basics of their own care before they leave the hospital is a key goal of an initiative aimed at reducing preventable hospital readmissions throughout the system.

Over the past year, the Johns Hopkins Health System Readmission Task Force—a group of doctors, nurses, pharmacists, case managers, administrators and other health care team members—has come up with evidence-based measures to improve patient-centered care by decreasing rehospitalizations. A bundle of these practices will be tested in pilot studies at The Johns Hopkins Hospital, Johns Hopkins Bayview Medical Center, Howard County General Hospital and Suburban Hospital by April 1. If successful, they will be applied system-wide.

The group’s recommendations include identifying patients at high risk for readmission as soon as possible, enhancing patient and family education, improving patients’ management of their medication, improving the transition from inpatient to outpatient care, targeting avoidable readmissions at all points during patients’ treatment, and creating a special telephone line for recently discharged patients who have questions about their conditions.

Implementing these measures will change some aspects of hospital care—for both patients and providers, task force members say. While patients and their families must become better educated about their conditions and the best ways to manage them, providers used to caring for patients only while they are in the hospital must now be ready to monitor their condition after discharge.

“Because the focus of hospitalization has been to limit acute care to severely ill patients, we’ve treated patients’ acute episodes and sent them on their way—what you might consider ‘door-to-door’ care,” says task force leader Amy Deutschendorf, the health system’s senior director of utilization and clinical resource management. “Now health care reform will hold hospitals responsible for ‘home-to-home’ care.”

Hopkins’ effort anticipates upcoming cutbacks in federal payments toward hospital readmissions as outlined in the Patient Protection and Affordable Care Act. There’s also another incentive: Maryland’s Health Services Cost Review Commission will start rewarding the performance of hospitals that participate in a voluntary program aimed at reducing readmissions. For the next three years, the agency will reimburse each hospital for a fixed number of readmissions per year. If a hospital has fewer readmissions, it can keep the revenue that would have covered the costs of the other expected rehospitalizations.

In addition to the pilot studies at various units in all four hospitals, hospitalists at Hopkins, Bayview and Howard County General will also try new strategies to coordinate care aimed at reducing readmissions. And, among other measures, Suburban’s emergency department is considering plans to implement regular patient follow-up calls, according to Robert Rothstein, Suburban’s vice president of medical affairs.

“Some reasons patients get readmitted are not within our scope,” points out Brotman, who served on the task force. “This bundle of interventions is intended to include all the places we can impact the readmissions process, beginning from when patients leave home to when they return. That means education, risk screening, identifying patients who need additional resources, and communication between hospital and community providers.”

“That’s what happens when a home care nurse calls the hospital physician who is busy taking care of new acute patients to talk about an existing home problem and is told, that’s no longer my patient. Then, when she tries the primary care provider, he’ll say he didn’t even know the patient was hospitalized, or has not seen the patient for a long period of time.”

Before long, Myers says, a problem that might be solved simply by changing medication becomes another readmission.

The task force is considering the creation of a group of “transition guides,” paid by the hospital but managed through home health care, to phone patients within 24 hours of discharge and visit those  at high risk for readmission within 48 to 72 hours of their discharge. These guides would go into patients’ homes to check their medications and whether they understood how to use them, as well as to look for other potential barriers to recovery, such as bathrooms accessible only by stairs. They would reinforce the discharge plans and might even help with such tasks as taking patients to their follow-up appointments with primary care providers.

Myers says more detailed screening at admission will identify those patients who are most likely to need such extra services. More immediately, she recommends scheduling crucial follow-up phone calls before patients leave the hospital.

“We want to make sure that they’ll be there when we call to see if there are any problems that we can fix early on,” she says. “And if people aren’t expecting a call, many times they just won’t answer the phone.”

One goal of the task force is to provide the best care possible for patients without increasing work demands on caregivers. That means increasing patients’ understanding of their own conditions and enlisting the help of their families and friends.

“We need to empower patients and train their family and friends to act as health coaches in managing their conditions,” Brotman says. “A large portion of our patients want to do the right thing, but we’re not imparting enough knowledge in the short period of time we have with them. It doesn’t work to give them all the information on the day of discharge.”

Instead, he says, comprehensive education must start early in the hospital stay. “We need to systematically and repeatedly encourage them to ask about their health condition and to voice concerns, such as worries about affording their medication.

“A lot of patients assume that we are going to deliver all the information they need to hear and that it’s not their place to ask questions,” he says. “The ones who need help the most are often the ones who don’t know what to ask. We want to prompt them to do that and improve the ways we engage them.”