Dome - To earn a patient’s trust

To earn a patient’s trust 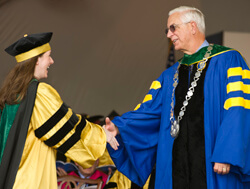 While Maria Esteli Garcia was doing an undergraduate research project in a remote part of Guatemala, she encountered a health statistic that inspired her to become a physician. In that small Mayan town, she learned that eight people had died of AIDS.

“I could not believe that such an isolated community could have such a high burden of HIV/AIDS, which I thought was primarily an urban disease,” Garcia says. The California resident, who had spent her early childhood in Mexico, began to realize the impact of cultural and environmental factors on disease and the role of health education and preventive strategies.

Garcia was one of the 224 graduates from the Johns Hopkins School of Medicine who embarked on their future careers as physicians and scientists at the 116th convocation ceremony on May 24 at the Joseph Meyerhoff Symphony Hall.

A total of 100 M.D. degrees, 110 Ph.D. degrees and 20 master’s degrees were conferred. Six of the graduates received both an M.D. and a Ph.D. degree. Those earning an M.D. will go on to residency training at 52 hospitals in 21 states. The Ph.D. students published 542 papers, were awarded 40 nationally competitive fellowships and scholarships, and have 27 patents.

This year’s school of medicine convocation address was delivered by Hopkins’ head of neurosurgery, Henry Brem, who has devoted his career to developing better treatments for brain cancer.

“Learn from your patients,” Brem advised the graduates. “We have a tremendous debt that we owe our patients for trusting their lives to us. I urge you to give back by using your talents and gifts to improve medicine. Commit yourself to advancing your field whether your laboratory is an actual laboratory, or the clinic, or cyberspace, or public health or policy issues.”

During college, Garcia became interested in public policy issues, when she had the opportunity to study in Guatemala and Brazil. She took a year off from medical school to earn a master’s in public health and spent another year researching quality improvement in HIV clinics in Tanzania as part of a program sponsored by the National Institutes of Health. “It’s been a wonderful six years in medical school. My parents are ready for me to graduate,” she laughs. She will do her residency in internal medicine/primary care at San Francisco General Hospital and hopes to specialize in infectious diseases.

Medical school graduate Alonzo Woodfield understands what it’s like to encounter cultural or language barriers. Growing up as the son of a diplomat, he lived in Kenya and Switzerland for periods of time.

After graduating from college, he worked for four years at an IT consulting company. However, when a close family member developed a serious mental illness, he decided he wanted to become a physician. Woodfield will enter an emergency medicine residency at Harbor-UCLA Medical Center in the fall. As an emergency doctor, he says, you can deliver care to patients with diverse backgrounds and “appreciate the individual needs of everyone who comes in the door.”

It is that focus on the unique needs of patients that Brem urged the graduates to pursue: “Always put yourself in your patients’ place. Realize that you can never truly understand what they are individually going through. But the respect, courtesy and compassion and understanding that you give should be what you would hope to receive yourself.”