As he begins his final year at Johns Hopkins, Ed Miller reflects on his seminal role as the first dean/CEO of Johns Hopkins Medicine. 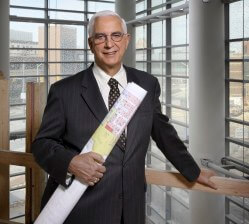 Amid the bustle of helping patients and visitors, Carletta Jones savors the moments when Ed Miller stops by her information desk. Over time, she’s met his wife and relatives from Rochester, and he’s admired photos of her brother, Irvin Hicks, the Baltimore native who served as U.S. ambassador to the Seychelles and Ethiopia.

Jones, an information receptionist at The Johns Hopkins Hospital, says Miller is one of the most engaging people she’s met during her 21 years here. Unlike many other Hopkins leaders who hurry past her corner en route to the next meeting, the dean/CEO of Johns Hopkins Medicine rarely frowns or appears lost in thought.

“Dr. Miller’s demeanor never changes,” she marvels. “If he’s having a bad day—and I’m sure he’s had plenty of them—you’d never know it. It’s always a joy to see him.” In fact the last time they spoke, Jones suggested he consider teaching a course on “How to be a CEO” after he retires.

The 68-year-old dean will step down in June 2012, after the new clinical buildings open. As the search for his successor begins, Miller and others have started to reflect about his transformational time at the helm as well as about some of the leadership qualities required to steer a billion-dollar organization. Key among them is geniality. The ability to establish personal connections with people ranging from members of the hospital staff to $100 million donors is one of the hallmarks of Miller’s leadership, associates say, and has helped fuel his many accomplishments.

Serving as the first dean/CEO of Johns Hopkins Medicine since 1997, Miller has presided over the unprecedented growth of Hopkins Hospital’s East Baltimore campus, as well as the expansion of the health care delivery system, the establishment of Johns Hopkins Medicine International, the development of collaborative research institutes, the increase of professional opportunities for women and underrepresented minorities, and the creation of a new curriculum for medical education.

One of Miller’s largest projects remains ongoing: construction of the Sheikh Zayed Tower and The Charlotte R. Bloomberg Children’s Center, clinical buildings that represent Hopkins’ pact with the future of health care delivery. They form the centerpiece of the transformation of the campus environment, a redesign that reflects the institution’s advances in science and medicine, as well as its commitment to delivering patient-centered care.

Most of all, Hopkins needed clinical buildings that matched the quality of the faculty and staff working in them. But overcoming apprehension about a $1.1 billion undertaking, the biggest hospital project of its kind nationwide, required Miller to apply his skills of persuasion in his new role as fundraiser.

Ed is thoughtful and he listens. He communicates well. He makes tough decisions, but only after he has received lots of input. He’s humble, one of the more humble people around. He’s fair and down to earth. And he really does live the core values. He is a great friend.

The execution was up to Miller. To meet the first year’s goal, he requested that all JHM employees forgo pay raises.

“I only got six emails—and none were negative,” he recalls. “The only suggestion was to freeze the pay for the higher-paid people while still giving a raise to the lower-paid people. I explained that wouldn’t work because there were so many of them.”

What caused the strategy to work, the dean says, was a shared sense of its importance and purpose, an attitude that has continued throughout the project.

“That says a lot about this organization,” he says. “Those buildings are really a monument to all of our employees buying into this thing.”

Miller says his most difficult time as dean/CEO occurred 10 years ago with the death of Ellen Roche, a 24-year-old research study volunteer who had been participating in an asthma study.

Her death, the first ever of a healthy volunteer at Johns Hopkins, shocked the hospital community, made national news headlines and caused the U.S. Office for Human Research Protections to suspend all federally funded research involving human subjects at nearly all Hopkins divisions.

On behalf of the institution, Ed Miller admitted blame, publicly apologized and reminded the world “that we also do an awful lot of good with our clinical trials.” In so doing, he earned the admiration of faculty and staff.

“He didn’t make excuses, he never pointed the finger,” Janice Clements, vice dean for faculty, recalls. “As dean, the buck stopped with him. He faced the situation square on, courageously, and then showed how to fix it. As it turned out, it wasn’t only our lowest period, but it was also a proud period in demonstrating how to make something right.”

Ten years later, Hopkins’ commitment to insuring safety in clinical trials has developed into one of the best programs in the country, says Chi Dang, vice dean for research. Not only did Miller increase the number of committees that meet weekly to review protocols of human research studies, he also created the position of vice dean for clinical investigation to oversee them.

Ed makes you feel good about what you’re doing and is supportive. At the same time he’s not going to look the other way if something needs to be done. When I was a patient at Hopkins a year or so ago, Ed dropped by to see me. Someone said, “Dr. Miller, you didn’t wash your hands.” He didn’t try to get out of it, he just stopped immediately and did it.

At the time of the incident, two institutional review boards had oversight for about 2,000 protocols. Last year, five boards reviewed 4,050 protocols under way at the school of medicine, the school of nursing and Kennedy Krieger Institute.

Concerned about the committees’ burdensome workload, Dan Ford, vice dean for clinical investigation, proposed that Miller agree to establish a sixth review board.

“He said that if that’s what we need to do for safety and oversight, that’s what we will do,” says Ford, who expects the new committee to begin work this fall.

Miller’s job has taught him that he’s not afraid of challenges, whether defending the institution, improving patient safety or changing aspects of the culture he inherited when he came to Hopkins in 1994 as director of the Department of Anesthesiology and Critical Care Medicine.

Take the issue of gender equity, for instance.

“When I came to the Department of Anesthesiology, I found a huge discrepancy in salary between men and women. I couldn’t believe it,” Miller recalls. “When I became dean, I ran into the same issue in a basic science department. In both instances, I just said ‘Fix it. It can’t be this way.’ Although it’s not perfect, I think there’s been an attitude change.”

Over the years, he has appointed 32 of the school of medicine’s 33 department directors, including the Department of Surgery’s first female director. Each search featured a new requirement. As well as expecting the prospective directors to be at the top of their fields, the dean began evaluating candidates on the basis of their skills as communicators, facilitators and mentors.

Ed has delivered a very strong financial enterprise with $2.3 billion raised in the last campaign. We have also basically rebuilt our entire infrastructure—research, hospital, clinical practices and education buildings—and built relationships with hospitals and patients beyond Baltimore that will extend the reach of our care and broaden our financial base.

When Miller chose Julie Freischlag as the Department of Surgery’s director in 2003, he was mindful of how the decision would expand career horizons for Hopkins medical students, half of whom are women.

“In hiring me, Ed changed the world of surgery,” Freischlag says. “I was told at another institution that they were not yet prepared to support me as department chair because I was a woman. Although you’d like to think this wouldn’t be such a big deal, it still is in many people’s brains. Ed knew I was qualified. And he also wanted me to change the culture of surgery.”

Freischlag considers Miller a partner in her success at opening the department to men and women from diverse backgrounds.

“Slowly but surely we changed how we perform and what we do. He’ll say that I accomplished cultural change, but that’s mainly because he gave me permission and the marching orders to make it happen.”

The leaders’ friendship and mutual respect comes as a relief to those with long memories of the institutions. While Johns Hopkins Medicine has been governed by one board of trustees since its creation in 1996, the dean previously reported to the president of the university while the health system president  reported to the health system board. Their disagreements could escalate into nasty, and sometimes public, battles—one reason the trustees decided on the structural change of having one leader.

Miller and Peterson have developed a special working relationship, one in which Miller describes himself as a risk-taker, albeit a calculated one, while Peterson is more measured.

Dr. Miller has  made Johns Hopkins’ emphasis on diversity into a living, breathing 21st century concept with his emphasis on student scholarships and efforts for faculty recruitment.

His support for the education mission has been unwavering, with among other things, encouragement and funding for the Genes to Society curriculum and securing the wonderful gift for the Armstrong Medical Education Building.

“When I see an opportunity, I often don’t see the downside,” the dean says. “Ron helps me see it, which is good. He’s much more into the weeds. I always say I’m up here painting the ceiling and he’s trying to push the ladder and make sure I don’t fall off.”

Peterson calls Miller a “broad-stroke guy,” while he considers himself more analytical and detail-oriented. They work out any differences they might have privately in order to present a united front.

“In public, we are generally singing the same tune,” he says. “I think people understand that it’s pretty difficult to play one of us off the other when we’re on the same wavelength.”

He says Miller combines visionary thinking with a fundamental understanding of operations that dates back to his days as an anesthesiologist.

“He has mastered the art of making sure that all components of our mission—patient care, research and education—are appropriately supported,” Peterson says. “And no matter what the issue, Ed always reminds us that the most important thing is patient care.”

The hospital president praises Miller for advancing medical education through his support of the Genes to Society curriculum, a new approach that emphasizes individualized health care. And he underscores the dean’s commitment to nurturing research opportunities that may improve disease treatment.

Miller considers among his proudest achievements the establishment of the Institute for Basic Biomedical Sciences, the McKusick-Nathans Institute of Genetic Medicine, the Brain Science Institute and the Institute for Cell Engineering. These centers encourage multidepartmental and multidivisional collaborations.

“Under Ed’s watch we’ve really done science differently,” says Chi Dang. “Department chairs feel these institutes are truly adding value to them rather than taking away power and influence. We’ve proven that when you put people from different departments together to collaborate, they can go out and get huge, huge grants.”

In turn Miller credits his effectiveness to the vice deans, department heads, administrators and trustees who have advised and helped him to implement so many ambitious plans. He considers their dedication to be part of the continuing power and mystique of Hopkins.

“People either love it or they hate it, there’s nothing in between,” he observes. “Do I know why? Probably not, but I think it has to do with this feeling that we really want to be number one. It’s this continual striving for excellence that has to be done with the highest of ethical standards. Hopkins is all about adhering to the standards: That’s a very long tradition.”