Dome - The new sounds of silence

The new sounds of silence 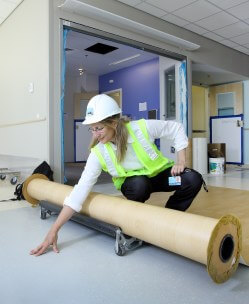 Hopkins architect Marge Smith checks out the rubber flooring in the neonatal intensive care unit, designed to tamp down noise for babies and families.

The babble of beeps, alarms and intercom pages on a typical Johns Hopkins Hospital unit speaks to the complex challenges of quality patient care. On one hand, the noisy environment is an accepted component of patient safety. On the other, a growing body of research shows that escalating noise levels can interfere with healing, lead to medical errors and desensitize staff to the urgency of alarms.

When the Sheikh Zayed Tower and The Charlotte R. Bloomberg Children’s Center open next year, a host of design features and new protocols promise to quiet the sounds of patient care.

Volume-reducing efforts in the new clinical buildings start with single rooms for all patients, an amenity that will protect each patient’s privacy. Voice communication between caregivers will also be enhanced, reducing the risk of errors caused, for example, when one drug is mistaken for another with a similar-sounding name.

Outside patient rooms, a variety of design elements and building materials will help to define zones designated as public and work spaces, another way of controlling noise, says Marge Smith, senior medical planner in the Johns Hopkins Health System’s architecture and planning office.

Decentralized nurse stations will diffuse the din that tends to occur when nurses converge at a single central work station. “The clinical staff won’t have to go back to the central area where people tend to be louder,” Smith says. The new design also “keeps nurses closer to the patients.” Each unit will additionally be equipped with a “team room” that will serve as a hub for nurse report, provider collaborations and consultations, Smith says.

High-end acoustical ceiling tiles will absorb sound throughout the new building, including busy workstations. “We know that those workstations are where doctors are going to collect to do rounds. We don’t want that sound to travel,” says Michael Iati, the Health System’s senior director of architecture and planning.

Also lending quiet to hospital spaces are acoustical soffits, architectural elements dropped from the ceiling to divide spaces and intercept noise before it reverberates along long hospital corridors. Additionally, the tactical positioning of acoustical panels wrapped in fabric in corridors and public areas will break up large spaces and absorb sound, Smith says.

In the NICU, rubber floors will tamp down noise for babies and families while easing the burden on the staff’s feet. “The whole operating motif was that we wanted the baby to remain in a place as quiet as the womb as possible,” Iati says.

The use of dedicated service elevators by support staff to stock supply rooms will also cut down on noisy traffic and squeaky carts in many of the clinical hallways.

Decibel levels in the new building will also be reduced by the new nurse call system, which will eliminate overhead paging. Instead of calling nurses through an intercom system, a unit clerk will triage all calls at the front desk and then send messages to the appropriate caregiver by way of a mobile device.

Eliminating a portion of the noise that comes from bedside devices is the goal of one group of providers who since 2006 have concentrated on fine-tuning monitor default settings to avoid false alarms. The workgroup first targeted Hopkins Hospital’s medical progressive care unit, where nurses were trained to set alarm limits and levels according to a specific patient’s condition and needs. As a result, critical monitor alarms were decreased by 43 percent, says Maria Cvach, assistant director of nursing clinical standards.

In addition to reducing the noise, the quality-improvement project is intended to prevent “alarm fatigue,” which occurs when caregivers become so desensitized to frequent, unnecessary crisis alarms that they become more likely to ignore them.

Cvach and colleagues also have launched pilots to see if false alarms can be reduced by changing electrodes on patients every 24 hours and changing telemetry batteries more frequently. “We are taking every opportunity that we can to reduce alarm levels before we move into the new clinical building,” Cvach says.