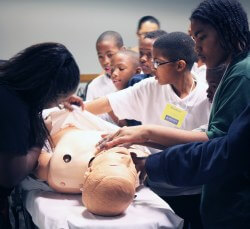 Fifth-graders get an idea of how to take patient vital signs with the help of a computerized mannequin.

In her 35 years as a Hopkins Children’s clinical social worker and educator in adolescent health and cultural competence, Carrie Vick has seen many East Baltimore children from troubled homes overcome formidable obstacles, like poverty and physical abuse. “Too often,” she says, “kids get a bad rap. We don’t talk enough about the children who are resilient and do well.”

Vick acknowledges that children need guidance and role models. That’s one reason that she jumped at the chance to participate in a recent event—a first ever for Hopkins—that drew 450 Baltimore schoolchildren and 60 volunteers like Vick from across the institution and community. Called “Claiming Our Future: A Career Exploration Day,” the full-day multimedia program in Turner focused on how to succeed in school, relationships and careers.

It was one of many Hopkins mission-inspired programs to improve the health and well-being of children and adults throughout the city, particularly in East Baltimore, explains Brian Gibbs, associate dean of the Office of Diversity and Cultural Competence, which hosted the event. “Our goal,” he says, “is to plant seeds for our potential workforce and professional leaders.” That includes addressing health care disparities “by creating hope and pathways to success.”

Homicide is the leading cause of death for African-Americans ages 10 to 24 nationally, and it’s the second leading cause for Hispanics in that age group, according to the Centers for Disease Control. Higher-level education, however, has been shown to extend life by encouraging children to take fewer risks.

The career day drew children from 20 Baltimore City middle and high schools. Fifth-graders got a taste of careers in medicine by examining high-tech mannequins that simulate patients. With guidance from staff of the Hopkins Simulation Center, they each checked a mock patient’s pulse, listened to a heart with a stethoscope and set up an IV drip. They also learned about the roles of various health care professionals.

The older kids, meanwhile, received guidance on life skills and decision making. There were frank discussions about gangs, unhealthy relationships and readiness for sexual relationships.

Pediatric neurosurgeon Ben Carson, the keynote speaker, recounted the story of how his mother inspired him and his brother. He urged the students: “Don’t let your peers drag you down. And if you don’t understand what’s going on, ask a teacher. Parents, teachers and relatives have already been through a lot. You don’t have to make the same mistakes—you’re the one in control of your lives.”

Shelley Greaves, a junior at Friendship Academy of Science and Technology, was among the many who lined up to ask Carson questions. “He inspires me because, though people viewed him as dumb, he believed,” she says. “He had an intrinsic motivation to do good.”

As one of five children growing up with a single mother in Queens, N.Y., Baptiste told students that her mother worked two jobs. Food was scarce, and the neighborhood was rough—“lots of drugs and crime, like in East Baltimore.” Baptiste and her family encountered discrimination, even within their African-American community. “My mother was from Haiti, and people assumed all Haitians had AIDS.”

Battling low self-esteem, Baptiste dropped out of college and worked as a secretary in a New York hospital. There she met a nurse who encouraged her to pursue her dream of becoming a nurse. Through hard work and support, she conquered her insecurities. “You have to believe in yourself,” she told the children, “and keep your eye on the prize.” Today she teaches basic nursing procedures at the school of nursing and is working on her Ph.D.

Plans are under way to make Career Exploration Day an annual event, says Gibbs, who praised the outpouring of help from volunteers. Vick has every intention of returning. “This event’s take-home message,” she says, is “every child, given the right tools, can be successful, and there are lots of people and resources in place to make it happen.”